Last week, as part of introducing my pets to you, I wrote about two of our family cats. I also wrote about how I grew up being a dog lover, which put me in the mood to write about the dogs of my childhood. In August, I’ll get back to informing you about animal issues.

I grew up with Samoyed. According to the American Kennel Club, this is an ancient working breed developed by the Samoyede people of Siberia. They used the dogs for herding reindeer, hunting and hauling sledges as well as guard work. The breed was cherished by these people, because they depended on the dogs for their survival. 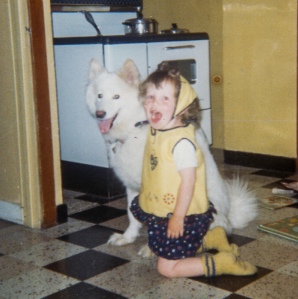 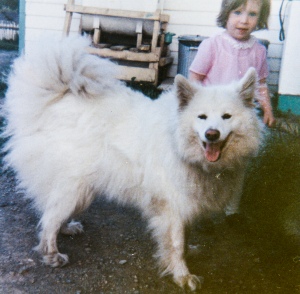 Both Samoyed that my dad and I owned during my childhood were gentle, intelligent, and protective. During the day, the dogs stayed outside in our fenced yard. In the evenings, they came inside, curling up at our feet on the floor or resting next to us on a bed. Due to their working heritage, Samoyed like to chase, run, and bark, which means they need an active lifestyle. My dad and I didn’t know anything agility or other canine sports at the time, but both dogs were taken for walks twice a day. They were wonderful family dogs.

Puff was our first Samoyed. She lived with my dad and I in an apartment. I remember how her hair shed so much on my clothes that I could collect small balls of it. Beyond that, I remember mostly the impact of her death on me. We made the decision, due to her ailing health, to euthanize her. Puff looked at me as if expecting to step off the examination table and return home with us. Since her death, I have struggled with the decision to end an animal’s life.

Polar was our second Samoyed. He lived with my dad and I in the house which is still our family home. I remember that Polar was so well-known in our neighborhood that ones knew who to call if he got loose. One time when I walked him myself, Polar got into a fight with another dog. I’m fortunate that nothing came of it. Being a protective owner, I wanted to step between the two dogs, which of course isn’t a smart thing to do. Polar didn’t like anyone to yell and would growl if those around me raised their voice. He died of cancer while I was away in college, an event which threw me into despair for an entire semester.

Sometime after Polar’s death, our next-door neighbors came around to ask my dad about taking in a dog. A couple from a farm had owned a Lhasa Apso. When the man died, the wife could no longer handle Cocoa. Our neighbors brought the dog for their relatives, but the grooming involved proved too arduous. As for our neighbors, they already had a dog…. And so my dad and I adopted a ten-year-old dog who became my closest companion. Being unemployed and out of college, I felt in limbo and friendless. I took Cocoa practically everywhere with me, as well as talked to him about everything. When he died only three years later, my heart was broken. From that time forward though, I’ve harbored a soft spot for older dogs.

After Cocoa died, my dad decided to get another Lhasa. According to the American Kennel Club, this breed originated hundreds of years ago in the isolated reaches of the Himalayan Mountains. It functioned primarily as a household sentinel, guarding homes of Tibetan nobility and Buddhist monasteries, particularly in or near the sacred city of Lhasa. What appealed most to me about the Lhasa history is the breed is considered good luck while, at the time, being nearly impossible to buy. Back in the earliest days, lhasa were not allowed to leave the country except when given as gifts by the Dalai Lama.

Sometime after reserving our first puppy, we received a call from across the country in British Columbia. The breeder who called raised Papillons. She told such delightful stories of their antics, I felt enamored. On an impulse decision, I decided to buy my own dog. According to the American Kennel Club, this breed was known in the 16th and 17th centuries as Dwarf Spaniels and were often depicted on the laps of French and Spanish noblewomen. An erect-eared type, fringed as to resemble the wings of a butterfly (Papillon means “butterfly” in French), developed over time.

Both dogs had their quirks. Choco never seemed scared of anything, barking at everything from vacuum cleaners to dogs twice his size. In contrast, Chuckles took years to overgrow his timidity, being fearful of even moving paper. Both dogs were loyal but independent. Once Choco tried to follow my dad down the basement stairs. He felt so determined to be with him. At the same time, he made it clear to me that brushing his teeth wasn’t something that would be tolerated. As for Chuckles, until arthritis prevented him from jumping, he spent every night curled up my feet or my sister’s feet. At the same time, at meal time, he retreated to his own private corner to eat.

Both dogs also lived to a relatively old age. Choco is the first dog whom I saw suffer ailments of old age. He grew blind, lost much of his hair, and sometimes experienced incontinence. As for Chuckles, he almost lived to be eighteen, but died of kidney failure. The day he died, one of my plants at my home flowered for the first time. All of our dogs are missed and loved. I look forward to seeing them at Rainbow Bridge.