Here, I want to share a few stories based on the lives of my own guinea pigs, the first of whom I got in February of 2001 and the last of whom passed away in June 2013. Photos and illustrations are mine. In the future, I hope to share more of their escapades, as well as those of my other pets. 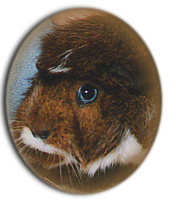 Finally, I decide on a guinea pig. Guinea pigs seem to hold just the right blend. My friend Andy also notes that guinea pigs are known for being friendly but timid. He thinks they sound just like me!

Off we go to the local stores, trying to find just the right guinea pig for me. We find one at a garden store.

There I see the whole family! They live in an aquarium tank lined with wood shavings. The dad looks like a snowman with patches of cinnamon around his face. So does the brother. As for my guinea pig, she resembles her mom. The two of them have coats of the same three colors: chocolate, rust, and white.

The colorings on my guinea pigs make me think of my favorite Christmas desserts: fruitcake. I try out her name, “Fruitcake. Here Fruitcake!” I decide to shorten it: “Hi Fruity!”

She bunches into her mother, until I can see only her side. Is she reluctant to leave? Is she saying good-bye? I don’t know.

Her mother drinks from a water bottle. The two males wander. In the background, four doves coo. A store lady picks up my new pet.

In a week, her brother will leave the nest. Right now though, my guinea pig is the first of her family to venture from the store. She’ll go with me to my home.

To transport my guinea pig to her new home, I put her into a plastic carrier. It’s lined with a thick blanket.