Did you know that according to Petfinder that two of the dog breeds with the highest numbers available for adoption are Chihuahuas (over 13,000) and pit bull terriers (over 17,000)? Other than the Labrador retriever, which also runs around 17,000, the closest that any other breed numbers is around 5,000.

My heart sinks to see those astronomical numbers. Some other breeds, such as English shepherd, Irish setter, and Japanese Chin each have fewer than a hundred in need of adoption. It’s difficult for me to envision how thousands of Chihuahuas and pit bulls could possibly get adopted. Yet there is something that all of us can do to help.

As the recipient of a grant from the Best Friends Animal Society, Lincoln Animal Ambassadors has created The Mighty and the Tiny Project whereby the group will spay/neuter Chihuahuas and pit bull terriers at only $25 per dog. LAA chose these two breeds because they are the most difficult breeds for shelters to place. We can support their efforts.

Who is the Best Friends Animal Society? Why have they awarded this grant? Nearly 30 years ago, this animal welfare group helped pioneer the no-kill movement. At that time, more than 17 million pets were being killed annually in our nation’s shelters. Through the implementation of spay/neuter and trap-neuter-return (TNR) programs to reduce the number of pets entering shelters, and through the increase in the number of people who adopt companion animals, these numbers have been reduced to around four million deaths per year.

Four million is still too many. The Best Friends Animal Society, along with many other animal welfare groups, are committed to reducing that number to zero. One way they are working to achieve this goal is through their No More Homeless Pets Network partner program with local shelters, which includes Lincoln Animal Ambassadors. Another way is through their national initiatives that focus on animals most likely to enter America’s shelter system. Currently, these are: cats, castoffs from puppy mills, and pit-bull-terrier-type dogs.

Over the next two weeks, I’ll overview the reasons why Chihuahuas and pit bull terriers are most at risk for relinquishment and euthanasia, and I’ll talk to rescue groups and owners of these breeds. For now, let me leave you with some stats from the Best Friends Society (and others) and a copy of Lincoln Animal Ambassadors’ The Mighty and the Tiny Project flyer.

The sad fact is that more than seven animals per minute are killed in our nation’s shelters. That’s 9,000 per day and 4 million per year. The majority of euthanized dogs are pit bulls. Sadly, pit bulls were once considered a great family dog; now, thanks to a reputation for being aggressive, they’re often banned due to Breed Specific Legislation.

The breed coming second to the pit bull in numbers euthanized is the Chihuahua. According to Mill Dog Rescue, the Chihuahua population has increased as rapidly as the pit bull population. By 2010, largely due to Taco Bell advertising and other media influences, the Chihuahuas accounted for 2.4% of the dogs offered for sale or adoption. Yet overbreeding has saturated the demand for these tiny dogs.

If you have an unaltered Chihuahua or a pit bull terrier, please take advantage of the below offer from Lincoln Animal Ambassadors. If you aren’t in that situation, please help LAA’s The Mighty and the Tiny Project reach as many dogs as possible by donating. Let’s all work together to reduce the number of unwanted dogs. 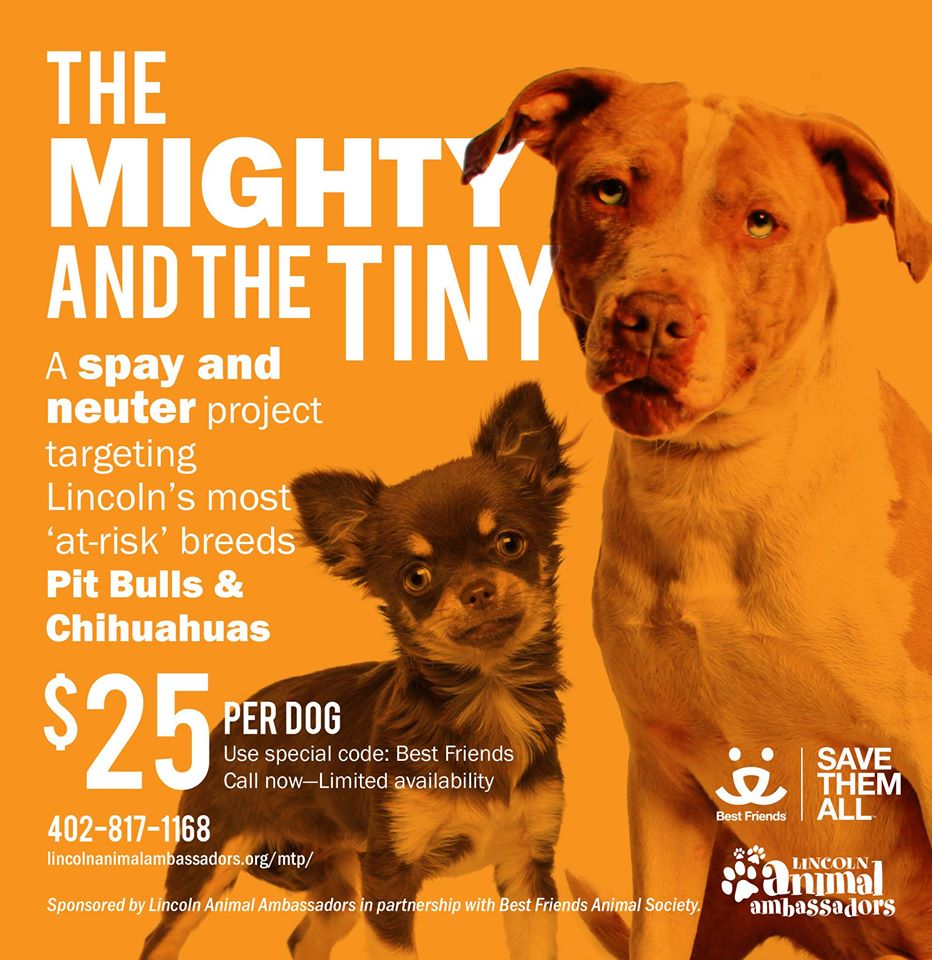