With February being Spay/Neuter Awareness month, it’s time once again to talk about the importance of getting your pets fixed. This week, my focus will be on our feline friends.

In a perfect world, we might not need to spay/neuter our cats. But the reality is 1.4 million unwanted cats are euthanized each year. In addition, according to the American Society for the Prevention of Cruelty to Animals (ASPCA) there are an estimated 30 to 40 million homeless cats. Clearly, we have a pet overpopulation crisis, and the one message animal welfare experts keep repeating is this: spaying and neutering is the best way to change those numbers.

There’s an interesting article at Live Science, which summarizes recent research as showing that “cat owners could use a refresher on the ‘birds and the bees,’ at least when it comes to their feline companions.” I won’t bore you with the statistics, but will share owner misconceptions about feline reproduction that contribute to our cat overpopulation crisis.

First, there’s the ignorance about the age at which cats can get pregnant. Quick, show of hands! Is it twelve months? Six months? Wrong and wrong. Did you know that kittens as young as three months old can get pregnant? This means it’s medically okay, and even recommended, to spay a cat when she’s a kitten. She just needs to be at least eight weeks old and weigh at least two pounds.

Second, there’s the ignorance about whether or not cat siblings can reproduce. Apparently, 39% of surveyed cat owners believed siblings couldn’t. The reality is they can. And do!

Finally, there’s a belief that female cats should have a litter before spayed. Pet overpopulation aside, spaying a female makes sense for health reasons too. It greatly reduces the risk of cancers if you have a cat spayed before the first heat and certainly before she has a litter. Moreover, spaying is an easier medical procedure if done before the first heat.

Many cats “come into heat” as often as once every few weeks, especially in warmer climates. The warm weather will coincide with the female cats’ heat cycles, causing a kitten “season” starting in spring, peaking in late spring or early summer, and ending in fall.

The serious stats are:

When you consider that half of those kittens will be female, and that each of those female kittens can also produce 87 kittens in seven years, the numbers add up quickly. One common stat is that a single unspayed cat and its offspring can produce 420,000 kittens in a seven year period. Obviously that’s a hypothetical maximum. Others say a more realistic figure is five thousand. Whichever number you use, it’s thousands more than would have been produced if that first female cat had been spayed.

In all likelihood, you’ve already seen statistics similar to the above in a pretty graphic that circulates online. They’re fairly common among animal groups. But when data from The National Council on Pet Population Study and Policy (NCPPSP) shows that 5.64 million kittens are produced annually from unplanned litters, we would all do well to educate ourselves about cat reproduction and to really pay attention to its impact on pet overpopulation. Margaret Slater, senior director of veterinary epidemiology at ASPCA, has pointed out in Live Science, “People don’t realize that it’s difficult to keep a cat from getting pregnant.”

Let’s consider the benefits of spay/neuter to your cat, who knows nothing about the overpopulation crisis.

For males, neutering reduces his risk from numerous health problems. Although cats are different than dogs and wander for reasons other than reproducing, such as hunting, neutering will decrease a tom’s urge to roam and to fight; this lowers his chances of disease transmission and injury. In particular, deep bite wounds are the leading factor in the transmission of feline leukemia [FeLV] and feline immunodeficiency virus [FIV]. Neutering also eliminates the powerful odor of adult male cat urine, as well as the tendency of males to spray in the house. Both of these last benefits will make you happier, and a happier you makes for a happier cat!

For females, neutering also reduces her risk from numerous health problems. Executive director, Rebecca Guinn, at LifeLine Animal Project notes that they see a lot of unspayed cats come into the clinic with pyometra (an infection of the uterus) which can be life-threatening. Spaying reduces urine-marking. Unaltered cats have urges that make them irritable and anxious. They yowl or whine frequently, fight with other cats, and/or destroy objects in the house. Spaying will eliminate these behaviors. Again, a happier you will make for a happier cat!

What does spay/neuter mean? Spaying is the surgical removal of a female cat’s ovaries and uterus, while neutering is the removal of a male cat’s testicles. Only licensed veterinarians are allowed to perform these operations.

How do spay/neuter operations work? Prior to surgery, your veterinarian may carry out a complete physical examination of your cat or draw a sample of his blood for analysis. To minimize pain and discomfort, both spaying and neutering are conducted while your cat is under general anesthesia.

What happens after spay/neuter operations? Most cats are back to normal within a few days. The surgery site usually heals within two weeks and any skin stitches are removed at a follow-up appointment with your vet.

THE BOTTOM LINE ABOUT SPAY/NEUTER

As I stated at the beginning, in a perfect world we might not need to spay/neuter our cats. However, with 1.4 million cats being euthanized each year and an estimated 30 to 40 million homeless cats, we clearly have a pet overpopulation crisis. Best Friends Animal Society explains, “Spaying or neutering your cat prevents unwanted births, which helps reduce overpopulation in shelters. Millions of unwanted animals end up in shelters or on the streets each year. Only a lucky few are adopted; the rest are either euthanized or die from trauma, exposure, starvation or disease. By spaying or neutering your cat, you do your part to prevent this tragedy.”

Ready to fight cat overpopulation? Lincoln Animal Ambassadors offers a low-cost spay/neuter voucher program in cooperation with nine Lincoln vet clinics: pet owners pay what they can afford toward the procedure and LAA pays the rest. Coming in February, LAA will offer a Fix Me Meow voucher. For just $25 you’ll be able to get your cat spayed/neutered, and vaccinations will also be covered. 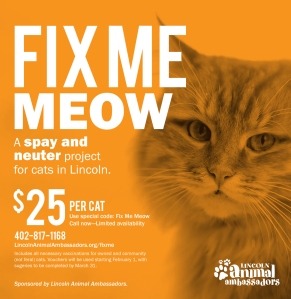 If you aren’t in that situation, please help LAA’s Fix Me Meow Project reach as many cats as possible by donating. Let’s all work together to reduce the number of unwanted cats.