In a new series from LAA Pet Talk, we’re going to shine the spotlight on some volunteers who are helping animals in unique and/or traditional ways. My second guest in this series is Mindy. I first met Mindy when I turned to Husker Cats volunteers for help socializing my foster cat.

What comes to mind when you think of ways people can make a difference in an animal’s life? I bet helping to hold garage sales and write for a newsletter didn’t make your list. Mindy wanted to help homeless cats, but her work schedule made it difficult for her to commit to the most-needed position at The Cat House, that of cleaning crew. Instead The Cat House found other duties that better fit her schedule, namely helping with its famous garage sales and writing articles for its quarterly newsletter. 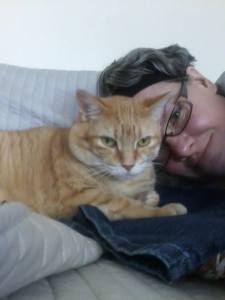 Mindy is the owner of two cats, Fleur and Lee, both of whom were adopted through humane societies in Nebraska. “I’ve had Fleur longer, and I can say with 100% certainty that she chose me…. I didn’t’ choose her! I still remember sitting on the floor of the interaction room at the west Lincoln Humane Society location. Fleur rubbed her head on my leg and then trotted over to the door to look out the window. Her tail was straight up in the air, I’ve never seen her hold her tail like that since then. It was straight as a flag pole. She glanced out the door and then came back to me and presented her chin for me to scratch. She then looped her tail around my wrist and I knew she had claimed me!” Mindy adopted Lee two years later because she thought Fleur needed a friend. When she brought Lee home, she opened up the cat carrier and he jumped out.” He sat down in the middle of my living room floor and, apparently, hasn’t moved much since. ;-)” 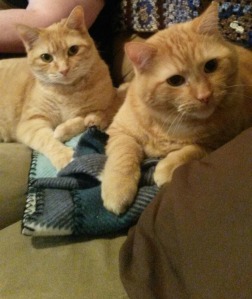 One day while driving to her bank, she saw cats in the window of a building. This is how she first discovered The Cat House. When she got home, she Googled the organization and was inspired to volunteer her time with them “because of the good works that they do for the homeless cats of Lincoln.” Her own cats bring her so much joy that she wanted to “help cats that were at the shelter while they waited to choose their person.”

Unfortunately, as I mentioned above, Mindy wasn’t able to commit to joining The Cat House cleaning crew due to a sporadic work schedule. Unwilling to be deterred, Mindy searched for other ways to help. Others at The Cat House suggested that she could help with its garage sales and its newsletters, and Mindy seized both opportunities.

The garage sale was a unique money-raising opportunity for TCH. I was always amazed at just how many donations we received from the community. The baked goods that were donated were always top notch! I got to know a lot of the wonderful volunteers by doing these activities.

You might have noticed that my two first volunteer profiles have been of individuals who help at The Cat House. Given that this month at Pet Talk I’ve been mostly talking about cats, I thought it would be appropriate to focus first on ways to help our feline friends. When I asked Mindy why she would encourage people to volunteer with The Cat House, she responded that not only do you sometimes get to hang out with cats that are awaiting their forever homes, you also get to spend time with “some of the nicest people on the planet!” Moreover, The Cat House will work with you to find an opportunity to contribute that suits your needs.

Over the upcoming weeks and months, I’ll post additional posts about people who are helping animals in both unique and traditional ways. If you are a volunteer, whether with dogs or cats or other animals, I’d love to hear from you so that I can share your story right here at LAA Pet Talk.

I would encourage volunteers to just get started! There is always a reason to not help or some chore that needs completed but volunteering helps not only the organization but you as well.