Wheek! In 2001, my life changed when I took home my first guinea pig. Each rental I lived in after that time was alive with squeaks, chortles, and the scurrying of tiny feet. My back yard brimmed with vegetables and I educated myself about the wide variety of fruits. Oxbow Animal Health, due to their expertise in hay, became one of my favorite companies. Over the next eleven years, I cared for three unique cavies before saying goodbye to the last in 2012.

For my first cavy, I narrowed my choices to a brother and a sister at a local store. I picked the girl, a multi-color cavy with dark colors that reminded me of a favorite childhood dessert: fruitcake. Fruity was my companion for almost nine years. For the first year, she was my only guinea pig. But although I spent as much time with her as I could, she was showing signs of loneliness. An online search and a road trip led me to a Kansas shelter where I adopted a light-brown cavy, whom I named Pudding after yet another favorite childhood dessert. When I lost Pudding at the geriatric age of five due to a surprise tumor, I adopted a chubby cavy in Grand Island. She’d been dumped there when her young owner decided was too much trouble. Her mostly-white coat with orange and brown markings earned her the name of Bumblebee, which I affectionately shortened to Bee. 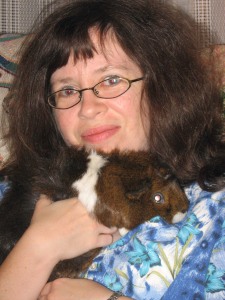 During her eight years, Fruity provided me with great companionship. Before a husband, dogs, and cats came into my life, she was often pretty much all I had. I enjoyed coming home and hearing her greet me as I crossed the doorstep. When not teaching or running errands, I spent much time at home planning lessons and grading papers. Fruity roamed about my feet or sat on my lap. If I needed a break, I might roll a toy or a toilet paper tube about and encourage her play. On my more ambitious days, I built her double-decker homes made out of cardboard boxes. She loved to customize these by chewing them to pieces a little bit at a time. Other times, I enhanced her cage with a ramp or a tunnel. Fruity enjoyed exploring not just her cage but also the rest of the house (under my supervision). In the lonely hours of night, I appreciated hearing her nibble on foods and shuffle about her bedding. I loved my squeaky fur ball.

As she grew older, I don’t know if Fruity really ever gave me much of a challenge. Sure, she moved about less, ate less, and interacted with her guinea pig companion less. I started weighing her on a weekly basis. I also sought out a greater variety of foods, but Fruity always seemed most content with pellets, lettuce, and water. She often rested on my chest as I watched television or read. When I wrote stories about animals, I often included her as a grandmother figure. She was a little frail, but also wise, and loved by all. If I’d known about pain medication, I might have opted for it. That aside, I provided her with more blankets, divided the cage during feeding time to give her plenty of time to eat, and otherwise enjoyed seeing her pleasant face every day.

Give that she was my first, I wish I could say Fruity outlived them all, but sadly she died of unknown causes in 2009. One night I drifted off to sleep to the quiet rustling of my guinea pigs, and the next morning I brought my girls lettuce and discovered Fruity lying motionless in the cage. I knew she was gone. It’s an amazing accomplishment that she lived to almost the age of nine. That’s a really rare feat for a guinea pig, similar to humans living to be one hundred. She also died in the best way. If I could pick that death for all my pets, I’d have them die of old age in their sleep.

During the few years she lived with Fruity and me, Pudding taught me that no two guinea pigs are alike. First off, her hair stood up on the top of her head, as if she were a motorcycle girl. Second, she liked to head butt me. If she wanted food, she butted my hands. If she wanted attention, she butted my arms. If she wanted off my lap…. Well, that’s when I wish she would have butted me. Instead, unlike Fruity who would warn me by squirming, Pudding would suddenly pee on me. 🙂 It soon became apparent that, despite my best aspirations, Pudding was going to be the dominant of my two girls. She was more pushy and obnoxious than Fruity, as well as more spirited and adventurous. If I had gated or otherwise secured a room, Fruity would readily accept those limitations. But not Pudding. She stubbornly pushed at any barriers she found, determined to boldly go where no guinea pig had gone before. And so, keeping track of two guinea pigs became more of a challenge. I loved every minute with my squeaky fur balls.

To my dismay, Pudding never made it past her early senior years. One summer, while in the care of my huband-to-be, Pudding’s appetite declined. He discovered her stomach was large and hard. The vet diagnosed her with a tumor. According to PetMd, most types of cancer are uncommon in cavies until they’re four or five years old. After that age, between one-sixth and one-third are known to develop tumors. Pet Place describes a variety of types of cancer that cavies can develop. Skin cancer is considered treatable through surgery, as is breast cancer. Other types have a poor prognosis. I don’t know anything about the type Pudding had, except that she died before she could get scheduled for surgery. Rest in peace, my little one.

After Pudding, I felt there was little choice but to find another companion for Fruity. And so Bee entered our lives. One of her most unique features was her appearance. My first two cavies had been Abyssinians, who are known for their rosettes and bad-hair day appearance. She instead was a teddy, most famous for their rough coat and turned up noses. Ours also had a big butt. 🙂 Another unique feature was her incessant desire to redecorate. Wherever I put dishes, she’d move them. Wherever I placed a cardboard structure, she’d not only chew on it but also push it to another location. Nothing was ever in the same location! As she grew older, I realized that she was much more curious about food than either Fruity or Pudding. One day while I was eating a banana, Bee grabbed at it and began chowing down—peel and all! After Fruity died, I learned to especially value Bee’s unique qualities.

Fruity’s death left me with a heart-breaking decision. By now, I was married. Our pets consisted not just of Bee, but also of a dog and a cat. Reluctantly, I decided not to find a companion for Bee. Instead, I gave her plush toys and tried to lavish her with attention. Whether being alone caused her to have more health challenges or not, I don’t know. Teddies are known for drier skin and ear wax buildup. These issues didn’t have anything to do with her being alone or even getting older, but there were other ailments too. Like Fruity, Bee began to lose weight. At least with Bee, due to her love of food, I could spoil her with a feast of melons, corn, and other delicacies. But then one morning I woke to discover she couldn’t move her back legs. The look of confusion on her face still haunts me. While apparently guinea pigs can recover from paralysis or at least adapt, Bee never did. I took her outside for outings in the yard. I treated her to leg massages. Nothing worked. She began to eat less and to develop sores from soiling herself. We made many trips to the vet.

On one of the last trips, Bee was diagnosed with gastric stasis. According to Sawnee Animal Clinic, this refers to “a severe slowing of normal emptying of the stomach and passage of food through the intestines, with little to no movement of food.” Because cavies can’t belch or vomit, with this disease food accumulates in the stomach. Cavies can become dehydrated, unable to eat, and constipated. The disease can be a painful one and, if treatment doesn’t work, it can result in death.

You can read about symptoms of gastric stasis at Guinea Pig Cages. Basically, Bee lost interest in food. Her stomach bloated. She wouldn’t drink. Her eyes sunk and turned dull. She stopped having stools and began to shiver. We fed her by syringe, injected her with saline, gave her laxatives, and massaged her frequently. Timely intervention is critical. Unfortunately, Bee was diagnosed too late and we lost her after many hours and hours of trying to save her.

Now our home echoes instead with the sounds of a senior dog and young cats. The vegetable garden has long ago been allowed to die, although I still eat fruit salads on a daily basis. I don’t remember the last time I had to pick piece of hay off the carpet, just this past fall I threw away the last well-aged Oxbow box. But the memories haven’t faded. My eleven years with guinea pigs, each of whom lived to at least their senior years, was a special time that I’ll always cherish.

To read more about Fruity’s arrival and some of her adventures with me, check out: