Kathie Phillips and I met when I used to volunteer at Hearts United for Animals. Since then, I’ve followed her posts on Facebook, which often feature rescued dogs. Indeed, she describes herself as “a longtime dog rescuer of special needs dogs who always leaves the porch light on for the next little weary furry traveler in need of a home”. One of her posts prompted me to ask her if she’d write about her experiences with senior dogs. Thanks to Kathi Phillips for the below tribute to a dog who aged before his time. 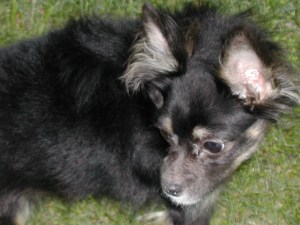 Age is relative…. if a creature is not expected to live to its first birthday because of birth defects, and that creature then lives to the ripe old age of 4-and-a-half, it is considered to be a “senior”. Such was the case with Jigger, a long-haired Chihuahua puppy with Hydrocephalus. The experts at Kansas State said he would not live to his first birthday because of the many seizures and multiple physical problems he experienced. Jigger came to live with us as a foster dog, so that he would at least experience life in a family during his short life.

Jigger walked like a marionette, awkwardly picking up and putting down his legs with each step. He shook constantly, and was unable to lower his head to drink or eat. When he wanted water, he would tap the water with his front foot, trying to get some water to his mouth. He could not lift his head to look upwards, so he walked unsteadily with his head looking down all the time.

Before a seizure, Jigger got a dazed look on his face and became very disoriented. During the seizure his little body cringed and contorted for 10 minutes before finally coming to rest. Afterwards, he made sharp cries and bit at whatever or whoever was holding him. Finally, after about 30 minutes it was over.

But these things did not keep Jigger from enjoying life. He took each 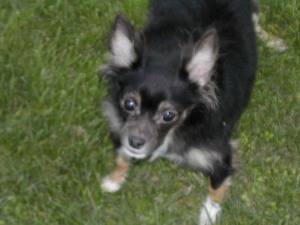 day with hope and grace. He could not run and play with the other dogs, but he loved to sit on the back porch and watch the other dogs at play. This seemed to bring him immense joy. He also loved to look at the walls and at people’s faces…. everything above his eye level. He soon learned that when the humans in the household were mopping up dog messes with a towel, they would pick him up and carry him around if he stood on the towels they were trying to use. This became a daily ritual that Jigger loved. He could see lots of interesting things on the walls and also get lots of loving attention as he was carried around the house.

Another thing that brought Jigger joy was chewing on the antique dining room chairs rungs. His humans decided that because there was so little that he could enjoy in life, he could have the dining room chair rungs. Long after his death, his humans have still not repaired the chairs…. They are a reminder of this little dog who taught us so many lessons about life and love.

Many accommodations needed to be made around the house so that Jigger could function. These included building a feeding and watering system that allowed him to eat and drink easily. We also learned to recognize the warning signs of a seizure and we found that, if we picked up Jigger before he went into the seizure, we could focus him on us by loudly saying his name and talking to him. When we were successful with this procedure, we were able to avoid the seizure completely. The vets were amazed that this was possible, but decided that since his seizures were not actually epilepsy and instead a result of another medical condition, it was perhaps possible to avoid the onset of a seizure. 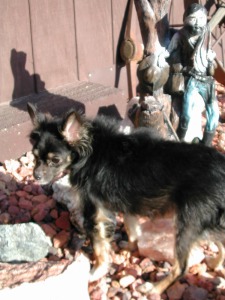 One day, Jigger stopped eating. Instead of his usual morning routine of greeting the day and his people with joy and love, he stayed in his little bed and slept. We knew something was very wrong, and took him to the vet. She sadly told us that the hydrocephalus had finally damaged the part of Jigger’s brain that regulated his heart, and that he was dying. We tearfully said our goodbyes to Jigger, and we knew our lives would never be as good without him. As we said our last goodbye, the vet told us that it was a true miracle that Jigger had lived to the age of 4-and-a-half. She said the miracle happened because of the love and attention he received throughout his life.

We hope that in his afterlife, his little body works perfectly so he can run and play and enjoy the things he could not when he was on this earth. Jigger taught us to appreciate every day and what we are given, to count our blessings instead of our challenges.