To accompany this week’s creative pet calendar events, I thought I’d share a fun activity that my husband and I did with our pets a few years ago. Inspired by an online photo gallery, we made paper eyes and mouths for our pets. Supplies needed were pretty simple: paper, colored pencils, and scissors. The pets included our then middle-aged toy poodle, our one-year-old tortoise cat, and an adopted senior silky terrier who passed away in May 2015. What follows are the results. 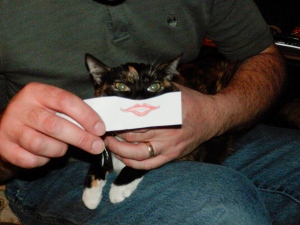 Our normally tolerant Barnaby proved less cooperative. We even used obedience training against him, giving the strict command to: “STAY!” We managed to get the below reluctant poses, before Barnaby dug in his heels. So much for all those dollars and hours on classes!

Our normally tolerant poodle was less cooperative. We used obedience training against Barnaby and told him: “STAY!” He posed four times for Andy. All those dollars and hours on classes were well spent. 🙂 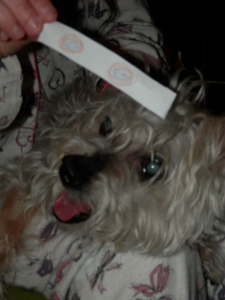 Finally, we let our pets say “Good night”. And they all forgave us for subjecting them to such undignified shots.

Interested in seeing more examples of pet eyes? I couldn’t find the original article that inspired my husband but, according to Bored Panda, the activity is popular in Japan.

If you try this at home, post your creations!