Kate has a little bit of royalty about her. The governor general, David Johnson, and his wife Sharon visited. Kate was six days old. We asked, “Would you like to name her?” “Yes,” she said, “I’d love to.” So she named her Kate after the Duchess of Cambridge. She said when they return home from their tour, they’ll be saying they just named a NL pony after Kate. “It’s very unfortunate,” the governor general’s wife said, “Kate Middleton is very allergic to horse hair”.—Netta LeDrew 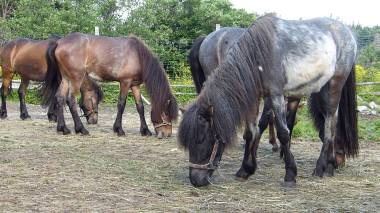 The eleven ponies living at the Newfoundland Pony Sanctuary are of all ages. The youngest are just two-years-old, and both have their own special story. Kate was named after royalty, while Angel is a special-needs filly who initially had to be bottle-fed every few hours. The three oldest are in their twenties and thirties, and have their own stories too. Twenty-three-year-old Heidi was rescued from an abusive situation. Although she remains shy of strangers, she shows great care and affection to her two foals. Twenty-eight-year-old Strawberry is one of the originals of the Sanctuary. She’s described as an “old-timer who has a breathing problem called heaves,” and is one of the horses who has benefited from the Sanctuary’s new barn in 2015. The new barn helps her breathing because “there’s less dust floating around and her hay can be watered down daily”. And finally there’s thirty-year-old, Princess, who is considered sweet and a lover of attention. She has one foal, Charm. When Charm herself became a mother, the Sanctuary gained the proud distinction of having four generations of the Newfoundland pony. 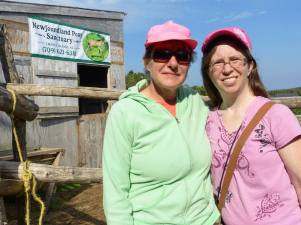 I grew up reading about horses and have always felt an affection for these noble creatures. Whenever given the opportunity to see them, I’ve always taken advantage of it. A few times in my life, I’ve even had the pleasure to ride them. So when my husband and I began to include sightseeing as part of our annual trips to visit my family in Newfoundland, one of the first places I asked to see was the Newfoundland Pony Sanctuary. The sanctuary is located on Change Islands, a small community of 300 people, which spans three small islands off the northeast coast of Newfoundland. The islands are accessible only by a provincially-operated ferry service.

Considered the largest Newfoundland pony sanctuary, it was founded in 2005 by Netta LeDrew and a partner who withdrew after five years for health reasons. The Sanctuary’s goal remains that of carrying out a breeding program for the critically endangered Newfoundland Pony. When I visited the Sanctuary, I chatted at length with Netta about the history of this distinct breed, the crisis the breed once faced, and their current status.

The NL pony was bred for work. They were very hardy and very strong. We had one when I was growing up. It hauled in enough firewood in the winter for two homes. And people had them for clearing their fields. In the spring, they hauled the capelin to the gardens for fertilizer. They hauled the kelp from the beaches. They helped build the roads around here when it was just a cow path. They did all that. And Sunday afternoons in the winter they took families for sleigh rides…. They’re good with kids. I had some friends here a couple of weeks ago. Their two-year-old sat down, fed one of our ponies grass, and he took it out of her hand. They’re very gentle. And they’re good natured.—Netta LeDrew

The sad fact is that sometimes you don’t know what you have until you’re at risk of losing it. Just as a whopping two million Mustangs used to roam the American landscape for centuries but by the 1900’s this icon of the American West was in danger of disappearing forever, so too the Newfoundland pony had been an integral part of Newfoundland culture but by the 1970’s their numbers had alarmingly from well over 10,000 to less than 100. 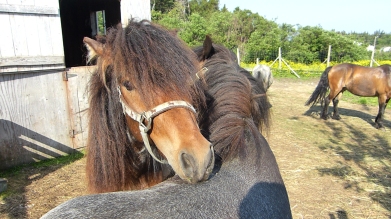 To understand the breed’s decline, one needs to first know a little bit about the history of the Newfoundland pony. Back in the 1500’s when the first Europeans settled in Newfoundland, there was no such thing as the Newfoundland pony. Instead there were mountain and moorland ponies brought over from the British Isles by the earliest settlers. In all seasons, those horses proved an asset to settlers who had to learn to live off this new and unfriendly land. Over time, the imported horses interbred with little or no introduction to other breeds. And from the harsh conditions of a frigid and rugged island came a sturdy, thrifty, and friendly pony that proved distinct to Newfoundland. Because they’d become so intertwined with the island’s way of life, their presence was taken for granted as recently as fifty years ago.

In the late 60’s, the government brought in the (anti-roaming) laws. You weren’t allowed to let your ponies roam. And then there was the introduction of the snowmobile. People started to get rid of their ponies. Meat trucks came from Quebec and took some for slaughterhouses. Others were just shot.—Netta LeDrew

The presence of the Newfoundland pony was so taken for granted that, when life began to change on the island, few were aware of how close they were to losing this precious treasure until it was almost too late. By the 1970’s, with their numbers having plummeted to less than 100, the Newfoundland ponies were virtually extinct. 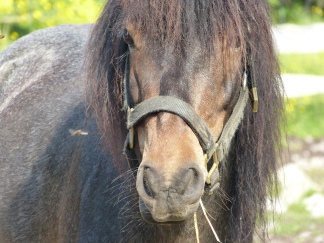 According to National Post, the Newfoundland ponies were made obsolete by mass mechanization. Tractors and other modern farm equipment gradually replaced them. In addition, people began to travel by car instead of on horseback or carriage. There were other factors too. Historically, in the summer, any ponies not needed for work had been allowed to roam free in herds, which encouraged them to find their own pastures to graze and breed with each other. New anti-roaming laws passed in the 1960’s prevented people from letting their ponies run loose in the traditional way, and this, according to Wizzley, also contributed to the decline in numbers. The saddest part is that many of the obsolete ponies were sold off to meat buyers.

The numbers are very low. If we don’t get new programs put in place, don’t put new mares and stallions in place to have foals, we could lose our ponies.—Gary Barnes, Saving the Newfoundland Pony 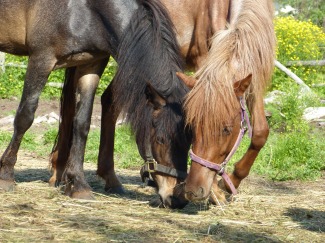 The other main reason for the rebound of the Newfoundland pony lies with Newfoundlanders themselves. Across the island, there are a lot of people who have two, three, four, or maybe five ponies. There are also a few sanctuaries similar to the one run by Netta, such as Embarr Stables and Dixie H. Farm Sanctuary in Goulds which have twelve ponies between them, and the Newfoundland Ponies of Cappahayden located on the South Shore which also has several ponies. One exciting experiment I heard about was run by Gary Barnes of Manuels and president of The Newfoundland Pony Society. He took ponies to an abandoned island near Placentia and left them to graze and breed naturally “as they did in olden days”. Although the first foal born from this experiment died and the second needed help to get his mother to accept him for feeding, new Newfoundland ponies are being born from this experiment. As Netta emphasized to me, no one is receiving a paycheck for all the work that they’re doing to save the ponies. Instead, this is a labor of love, taken on out of admiration for the Newfoundland pony. Many also view it the way Gary does, as a way to “fulfill a debt to the little workhorse that helped build Newfoundland.

Today I got carrots from Martina and Sophia and it was hectic! I just wanted the last carrot because I hadn’t had one yet and Lily and Angel were butting in trying to get the final carrot. Finally, I got my carrot, after so long Angel and Lily gave up, and the girls gave me the carrot.—Kate’s Blog 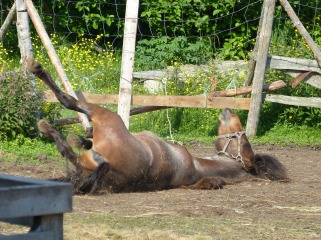 The Newfoundland Pony Sanctuary is a big tourism draw. Netta told me, “In 2012, I had 800 visitors. I can’t wait to get the numbers for this year (2013) because in June alone I had over 200 visitors. I think it’s because of the publicity where I’ve been telling my story … and we’re doing fundraising. We had a pony birthday party to kick of Canada Day. I raised $11,000 that day.” Year-round, school groups visit. Students are introduced to the ponies, learn about their history and their importance, and interact with the ponies.  The above quote comes from Kate’s Blog, started by two young girls of Change Islands and dedicated to the ponies at the Newfoundland Pony Sanctuary.

The ponies bring in tourists and the ponies needed a new home and we need a better facility to breed and bring the numbers up.—Netta LeDrew, CBC 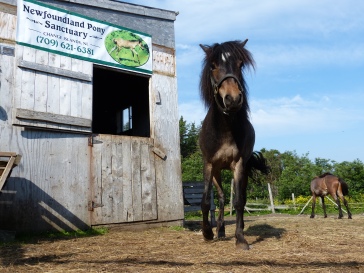 My interest in the Newfoundland Pony and in the Sanctuary on Change Islands didn’t end with my 2013 visit. When I had talked to Netta, she had told me that the Sanctuary’s current barn made it difficult for the Sanctuary to care for its existing ponies and doubly hard to expand. In an interview with Canadian Broadcasting Corporation (CBC), she noted that the barn didn’t have running water. “We used to have to bring the water in buckets from the wells. I didn’t mind… except there was times we had to shovel a lot of snow off the wells.” As I continued to follows news of the Sanctuary through social media, I learned of its bid for the Aviva Community Fund monetary prize. Along with many others, I voted daily for the Sanctuary to win, and was elated when the Sanctuary was awarded the grand prize of $90,000. The Sanctuary used the prize money to build a much-needed new barn. In an interview with CBC, Netta expressed her gratitude to the public for its support. “It means everything. It’s all I wanted, so I look forward to a very bright future. “Thank you, from the bottom of my heart, thank you.”

When Andy and I first visited the Sanctuary in 2013, it was difficult to find. We passed it twice. If there was a sign, it was small. There was no parking lot, and no buildings or ponies visible from the road. There was only a rocky path off the side of the road, descending and winding through scrubby trees and bushy plants. At the end of the path, in a clearing, was a corral and a dilapidated gray barn. Despite the persistent, hungry horse flies, we enjoyed our visit. However, it was clear that the Sanctuary was struggling. When I look at the photos of the post-expansion Sanctuary, nothing looks the same. There’s a magnificent new red barn, spacious green fields, and great views of the Atlantic Ocean. Obviously, my husband and I are due for a return visit. I like the Newfoundland pony, and am thankful that there are a huge number of people who are working daily to ensure its survival.

With new facilities, with a new office, a store, a website, running water and plumbing, Ms. LeDrew will have better work conditions. The ponies will also have better working conditions and more foals can be born which always attracts great media attention which in turn will bring more visitors. These ponies who we are trying to save can also contribute to the community in which they lived. Newfoundlanders all over are joining to support Change Island and the ponies.—Campaign video produced for the Aviva Community Fund competition.