I know what you’ll be doing this evening.

The above statement is what my husband told me after sending me a link to an article called How to Trap a Cat in Three Easy Steps. The article states that “when users of Reddit and Imgur noticed that their cats are attracted to circles, submissions poured in of other cat owners trying these low-tech traps.” The author offered up the explanation that a love of small and secure spaces might be what attracts cats to circles. In other words, circles create the allusion of safety.

It took me a while to get around to trying some circle traps. When I finally did, I found myself at home without an abundance of circular objects of the right size for a cat. Yet illustrations on Bored Panda showed a person using colored tape. Simple enough! I grabbed a roll of painter’s tape and used it to form a questionable-looking circle on our kitchen floor. You can see from the lack of photos how much interest the circles generated among my cats. Maybe it had something to do with the location? I tried creating another circle out of tape in the dining room. Strike two. By then, I’d also run out of locations in our house that didn’t have carpet. 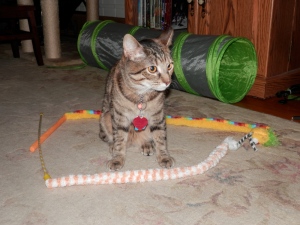 The people in my life know that I’m determined, persistent, and stubborn … to the point of being obsessive. And so I immediately began to look around the house for other objects I could use to form circles. Ah-ha! I spied the canister that holds the cats’ many dangler toys. I pulled out the most flexible of them and once again created a questionable circle on our living room floor. Our feral cat didn’t even blink an eye. Our tortoiseshell cat showed mild curiosity, in the sense that she turned her head to see what I was up to. I sighed and began brainstorming again. And, as I did, our brown-patched cat wandered over to the circle, sniffed it, and stepped inside. Proud of my accomplishment, I refused to let her leave before I snapped a photo of her! 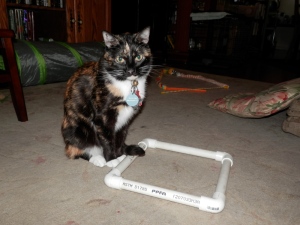 Still, it’s not exactly as if Rainy felt trapped in the circle. As soon as I stopped telling her to “STAY!” she scampered off to other explorations. Maybe our cats’ lack of interest had something to do with shape? I revisited the photos at Bored Panda, studying the examples sent in from users all over the world. Ah-ha! I’d forgotten all about our training tools. From the back room of our kitchen, I took a hoop. You can see from the photo here that its shape is perfect. In fact, I felt the shape so finely formed that I sat camera-in-hand as I gloated inwardly about how smart of a cat mom I was. Well, it turns out that the questionable shape of my circles had nothing to do with my earlier failure. And if you study the initial photos yourself on Bored Photo, you’ll see that this makes sense. Their circles aren’t exactly stellar either. So I ended up mystified as to why once again my circle caught no traps. 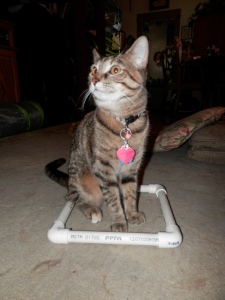 As I’ve already noted, I tend to be obsessive. If people all over the world could not only lure their cats into circles multiple times but also ‘trap’ them there, why couldn’t I? I decided to break ranks and try a completely different shape for my cat trap: a square. Almost instantly, I found some success. Cinder strolled over to it and then put a foot inside. But then as if gloating herself at being smarter than me, she retracted her foot and sat down next to the square. Patiently, I waited. Our feral never did bother to climb down from her comfortable napping position in the cat tower, but Rainy was another story. Not only did Rainy sprint towards the 1-foot by 1-foot square shape made from PVC pipes, but she hopped in it and stayed without any encouragement on my part.

I know what you’ll be doing this evening.