Reprinted with permission from Rachel Loehner, Three Chatty Cats. This article is original in content and not to be reproduced elsewhere in any form. Copyright January 29, 2016.

Play fighting is both natural and good for your cats. It can be a bonding experience for them and it’s also good exercise! However, sometimes it may be difficult to decipher if it’s real fighting or just a friendly play fight. Here are some things that I’ve learned and witnessed while being a cat owner.

When it may not be play fighting 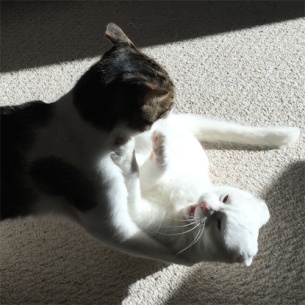 These are just some general things to watch for. But of course you know your own cats best and know their typical behavior toward one another. If it does end up being a real fight, it’s usually recommended to not get in the way, as you will likely end up getting hurt in the process. You can try getting their attention with treats or food, or perhaps clapping loudly to draw their focus away from each other. You should not just let them finish the fight if you feel it is an actual fight. One of the cats could end up getting scratched or hurt.

If you’re concerned about your cat’s behavior, you should consult your vet or an animal behaviorist. If you’re looking for more on fighting vs. play fighting, you may want to read this article here.

Feel free to chime in with your experiences and how your kitties play.

This video doesn’t show cats fighting for real (no one wants to see that), but it is very clear that Olive does not want to play. (Volume up!)

And this video, compliments of The Zoo Rescue, shows foster kitten Fritz partaking in a play fight with his older sibling.

Rachel’s goal with Three Chatty Cats is to bring attention to great cat rescues and their life-saving efforts. She also wants to give helpful tips about cats and acquaint visitors to her own cats. “I truly hope that we can save them all – and I want to do my part by bringing about awareness through profiling rescues and rescuers, while also having fun blogging about my three (chatty) cats!”