Ever since developing a curriculum for young people about the interconnected relationship between people and pets, I’ve been interested in how we can not only make a difference in the lives of animals but also how they can make a difference in our lives. When I heard Kathy Zupanic’s story about how she and her dog, Skylar–along with the Southeast Community College’s student Psychology/Sociology Club and their faculty mentor–created and then piloted a “Therapy Dogs During Finals Week” program, I had to know more.

After two years of begging, he allowed me to get a terrier-mix who I named Trixie; with all of my excellent begging skills I was destined for a career with dogs.

Kathy describes her family as “Old World Slovenian”. Her immigrant grandparents had ten children and were too poor to ever consider having indoor pets. Kathy’s parents therefore were first-generation Americans. As a little girl, Kathy entreated with her father for a dog. Although he didn’t want her to go through the emotional pain of perhaps having to give up her dog, he eventually agreed.

Kathy’s love of animals grew stronger as she matured. She recalls watching the Westminster Kennel Club dog show each year and wishing for parents who were in the “dog business.” Her early favorite group was the terriers, followed by the toys. 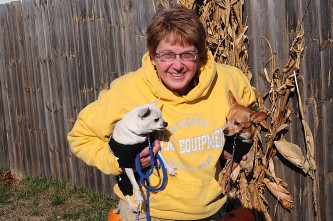 This fascination with terriers led her as an adult to purchase two: a West Highland White Terrier named Colleen, and a brindle Scottish Terrier named Lindsay. Thanks to being friends with a family that owned a pack of Chihuahuas when she was a child, she also developed an affection for this breed, and so as an adult she likewise added them to her pack. A friend of hers who was helping Kathy with obedience training recommended she try one of her Chihuahuas in agility at the Greater Lincoln Obedience Club. Kathy was not only hooked after that class, but grew in her addiction “to dogs, dog-related activities, and animals in general”.

After seeing a “blue” Chihuahua, Kathy fell in love with this rare version of the breed. She likes animals that are unusual, and the colors reminded her of a tuxedo cat she had once known. The color and markings of the “blue” Chihuahua were so beautiful that she wanted one of her own, and ultimately she bought a puppy from a family in Missouri. “Skylar cried and cried all the way to my home. I felt so sad to be taking her away from her family.”

Kathy says that Skylar was always loving and affectionate. Skylar was the “baby” of the family. She’d spend the entire day with family member, Carmen. She’d curl up in a blanket on Carmen’s computer table. Skylar was so loving with the other dogs, she quickly found her place with Kathy’s older Chihuahuas. Skylar even developed a tight friendship with one of them, an agility dog named Aishan who became Skylar’s guardian and protector.

Skylar is so cute and so smart. When I see her, I feel extremely happy inside. I love Skylar tremendously and am grateful that she’s in my life.

When Skylar was still a puppy, Kathy began taking Skylar to work with her. People were so happy to have Skylar around that Kathy began to think of using her as a therapy dog. She decided to sign up for Healing Heart Therapy Dogs, which she had heard of through her involvement with the Greater Lincoln Obedience Club.

For Kathy to use Skylar as a therapy dog, Skylar would need to pass the American Kennel Club’s Canine Good Citizen test). According to Kathy, because of Skylar’s calm and confident demeanor, training didn’t take much effort. In Kathy’s words: “Skylar appears to accurately ‘read’ her environment. She’s not fearful about interacting with strangers (as long as they’re not being overly loud or angry) and can be quiet when the situation calls for this behavior. All of these traits make for an excellent therapy dog.”

Once Skylar was certified, Skylar had many opportunities to demonstrate her therapy dog skills. Often she would help Kathy teach her beginning obedience at Greater Lincoln Obedience Club. “Skylar was confident enough to be able to demonstrate obedience skills with me in the center of the ring while we were surrounded by around ten big dogs and their handlers.”

One of the cutest things Kathy remembers from Skylar’s therapy dog work was a day when Kathy took her to visit the women at St. Monica’s Treatment Center. One of the women sat her nine-month-old baby on the floor, and Skylar crawled up in the boy’s lap. Then Skylar stood up on her hind legs to reach his cheek and gave him a kiss. The toddler giggled and hugged Skylar.

Those early days of using Skylar as a therapy dog, combined with Kathy’s own research into the value of using therapy dogs in higher education, led her to an idea of using therapy dogs during exam weeks at Southeast Community College where she teaches. Being the type of person who likes to act on an idea “that benefits all species,” Kathy didn’t just let her dream sit but instead approached the faculty sponsor of the Psychology/Sociology Club at SCC. She talked with Ms. Trevena-Flores because they shared a mutual of love of dogs and because the club mentor could provide a group of students to help with research projects.

Everything fell into place. Kathy’s immediate boss, the Chair of Social Sciences, was supportive of her project. The Student Activities Director, who was also a dog lover, agreed to the use of the Student Center. And finally, Healing Hearts Therapy Dogs carried the correct type of liability insurance for its teams, which was a huge factor in Kathy’s favor with SCC administration. In 2013, Kathy and Ms. Trevena-Flores submitted their proposal. It was approved.

Being able to combine my love of dogs with my work as an educator and social scientist, and to include one of my own beloved dogs in this project, is one of the best gifts I could have received this holiday season.

Three times a day, on three days during finals week, handlers bring their therapy dogs to the Student Center at SCC. Although Kathy originally saw students as the project’s target audience, students, faculty, and staff come to the Student Center to spend time with the dogs. The hope is that this interaction will result in reduced stress during what is normally a stressful time. And of course the dogs love all the attention. “It appears to be a very positive reciprocal relationship for everyone involved.”

Kathy shared one special moment from last quarter. Kathy noticed that one of the therapy dogs was the same breed as the dean’s dog. “I ran downstairs to her office and asked her if she would come upstairs with me as I had a surprise for her. She spent time with the handler and her dog and later stated that she too (the Dean) experiences joy and relaxation from interacting with the dogs.”

Much of the research on the project is being done via surveys. For the most part, the feedback (both on the surveys and by word of mouth) has been positive. The students continue to want therapy dogs during finals week. Many faculty members support  the project.

In 2015, Kathy and her fellow colleague, Ms. Trevena-Flores, were given the opportunity to submit a proposal to present their suggested model for therapy dogs in higher education at a national conference. The acceptance of their proposal came that December. Kathy described the news as “the best gift Skylar could have given her”. This past March, a group from SCC—consisting of Kathy, Skylar, other therapy dog teams, and students—were given the honor of presenting their research at a conference in Chicago. Check back tomorrow to read Kathy’s write-up about that big event.

At the writing of this article, Kathy’s project is ongoing. Kathy says that the latter will, “culminate in the creation of a longitudinal study on therapy dogs in higher education research article”. She also noted that everyone involved has been talking about expanding the project to other campuses. “As long as I’m teaching at SCC, the program will continue.”

Kathy has additional dreams involving animal welfare. She has completed 80% of her Master of Science in Applied Behavioral Analysis for Companion Animals. With that knowledge in hand, she hopes after graduation to develop a Mighty-Mini training school that will specialize in Toy and small Terrier breeds, and would offer small-dog breed training and behavior interventions.

Skylar, now nine years old and suffering from painful arthritis, retired from therapy dog work last spring. She’s doing well on medication, but Kathy doesn’t want to place her in stressful situations. Instead, Skylar continues to enjoy going out and about with Kathy, while also getting to take long rests.

My beloved dogs are the most important individuals in my life and I owe my personal happiness and wellness to them. I am blessed to be a pet parent.