Agility is a great sport, perfect for the owner and dog who just want to come to classes to have fun and meet people as well as for those who wish to go to competitions. —Kat Potthoff

When my husband and I arrive at the Greater Lincoln Obedience Club (GLOC) for an agility class, instructor Judy Vitamvas is studying a course map. Under Judy’s direction, Andy and I follow her directions for where to position obstacles. As other students arrive, they pitch in too. After everything is in place, the numbered cones are set out. The jump bars are set to a starting height of 8 inches for the smallest dogs in the class. When the course is finally laid out, students walk the course without their dogs. After the students have worked out their strategies, they exit the course, return to their dogs, and take a seat to wait their turn. 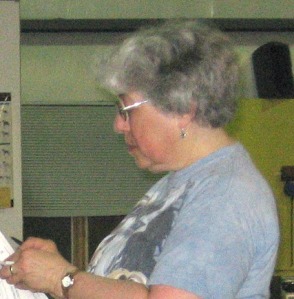 Tonight’s course is “dog’s choice”. Andy heads to the starting line with our seven-pound poodle. Ahead of them are three tunnels. Barnaby can enter whichever one he wishes. Andy candirect him, but must do so from behind the starting line until Barnaby enters a tunnel. The tunnel that Barnaby picks determines which numbered sequence of obstacles he must perform. Naturally, then, the challenge is for the handler to learn all three options, and to adjust on the fly. Throughout the one-hour class, dogs of every size run the course multiple times.

Although I came with Andy and Barnaby as an observer, as the session nears it ends, Andy encourages me to take a turn. I’ve taken agility classes with Barnaby, and even competed with him, but it’s been a few years. Yet participating in dog sports is like riding a bike—one never forgets. Despite feeling nervous as I approach the starting line, once Barnaby dives into a tunnel, my adrenaline kicks in. I run past the tunnel and immediately begin directing Barnaby through his chosen course. “Over!” “Walk it!” “Teeter!” and “Weave!” are a few of the commands I call out. True to form, Barnaby heeds each of my commands as we zoom this way and that through the obstacles. When we race to the finish, he flies over a jump, and Judy and her students cheer.

The primary purpose of agility is to have fun with your dog and to build teamwork between the two of you.  It also burns off a lot of energy in a high drive dog.—Judy Vitamvas

Agility owes partial thanks to a horse-expert named John Varley. In 1978, he was asked by the Crufts Dog Show to entertain crowds between its events. Agility owes the rest of its thanks to Peter Meanwell, a dog-trainer whom Varley turned to for help. Together, the two developed a jumping-style course for dogs, modeled on those in the equestrian world, that would show off their speed and elegance. Since then, agility has become one of the fastest growing dog sports in history.

To do agility, both the handler and the dog will need to learn a wide variety of skills. Because agility involves large expensive pieces of equipment, the best way to learn agility is by taking classes. The dog will need to learn how to perform each obstacle, and how to interpret their handler’s commands, gestures, and body language. The handler will need to learn how to teach their dog the desired behaviors, how and when to give commands, how to plan a good strategy for a course, and how to perform different types of “crosses” (which are maneuvers that get dog on the other side of its handler).

People involved in agility (and other dog sports) also work to educate themselves on positive dog training, nutrition, and anatomy and physiology to be better prepared to keep their dogs in shape and healthy for their lives and to participate in dog events and sports. —Kat Potthoff

It should be clear by now that agility is a team sport. The team is you and your dog. Your dog might be performing the obstacles, but he/she couldn’t do it without you. Because of the many hours of training closely with your dog, the two of you will develop a unique bond. All this activity will also be good for your dog’s health (and yours!), and learning new skills will boost his confidence. The rest of my article will share highlights of my conversations with two GLOC agility instructors about their reasons for becoming involved with agility, and their experiences as trainers.

Both trainers with whom I talked have long held a love of dogs. Judy Vitamvas grew up wanting a dog, but couldn’t get one until she was adult and had her own house. She got her first dog in her 40s, and has had two or three dogs at a time ever since. Kat Pothoff has had several dogs, but Riko is the first dog with which she’s done more formal training and competition. “Riko enjoys learning new things as much as I do and so we have tried many different dog events such as: obedience, rally, agility, dock jumping, barn hunt, tracking, musical freestyle, and a few other things. He loves to go hiking and camping too. This past summer we learned to SUP Pup–Stand Up Paddle Board.  He really enjoyed sitting on the board and taking a ride! Water sports are among his favorite things.”

Most of my experience has been “on-the-job training” teaching classes, supplemented by extensive reading on dog behavior and training techniques and working with my own dogs.—Judy Vitamvas

The two ladies have also been GLOC members for several years. They became trainers to support the club that they love. For Judy, GLOC’s current president, the process of becoming a trainer was a gradual one. She came to GLOC in 1988 to take an obedience class with her first dog. She later returned with her second and third dogs. After the third dog, she started assisting with obedience classes. By then, she’d also become interested in agility, which she picked up mostly by trial and error. As remains true today, there’s always a need for instructors, and so Judy began teaching agility too. She’s now been an obedience and agility trainer for over 20 years with GLOC, slowly becoming better over time. “I eventually realized that I enjoy working with the students and have a knack for getting along with dogs.”

For Kat, who has been a volunteer in various capacities for almost eight years, she became a trainer because of being inspired by other members. “Many give tireless time and energy to help teach classes.” Kat also noted how many GLOC members do volunteer work with rescue groups or with individual families who are struggling to understand canine behavior, so that challenging dogs can live successfully in a family situation. Kat also feels that demonstrating skills to her students with her dog Riko has benefited him. “It’s a good opportunity for Riko to get out and meet new dogs as well as try new dog disciplines and learn new skills.

The best way to really know if you fully understand a concept or skill is to teach it.—Kat Pothoff

On the path to becoming an experienced teacher, one will make mistakes. For example, as with some other long-time members, Judy Vitamvas began learning how to train when the methods focused on correction rather than praise and reward. Consequently, Judy was “probably too impatient with the students and too harsh with the dogs.”

Being an agility instructor will provide one with many memorable moments. For example, there was a time when Judy was a trial chair and there was an incident that led to some rather red faces. Back then, GLOC was building its own because commercially-made equipment either wasn’t available or was too expensive. “There was a group of competitors who were always finding something to complain about our equipment. Suddenly the chief course builder, who had also made most of the equipment, took the microphone and proceeded to let the group know what he thought of them in no uncertain terms and unkind language. Fortunately, the judge didn’t report the incident, but that group did not return to our trials for some time.”

Fortunately, the lighter moments far outweigh the embarrassing ones. Judy shared a story about doing agility with her third dog, Tango, a black Shih Tzu, on a hot day in the park. Tango began to resist Judy’s training efforts, which led to Judy becoming increasingly frustrated. “Suddenly, Tango ran to the chute and refused to come out of the fabric, not knowing I could see her big lump. I laughed and realized I was being too hard on her. We quit for the day.” Judy recalls an equally funny moment with Tango on a similarly warm day at an agility trial. “Tango first hid in a tunnel and then under the secretary’s table in the shade. Smart!” 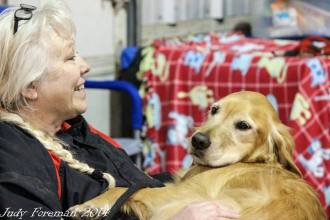 Kat remembers fondly when GLOC celebrated its fiftieth anniversary. “We put over 50 dogs in a stay. Then we had some volunteer photographers from the club shoot several different angles of the whole process of sitting the dogs. We also put one photographer up on a long ladder to catch a shot of all the dogs. It’s still fun to look at those photos.”

The biggest reason to check out GLOC is that all our trainers are volunteers. We do this for the love of the dogs, and the love of training. Beyond that, we have many trainers who have years of experience. If one trainer doesn’t know the answer, we can bring in another trainer and see what they suggest.—Judy Vitamvas

Since 2008, our family has participated in one class or another at the Greater Lincoln Obedience Club. Naturally, then, when I decided to write a series of articles for LAA Pet Talk about local pet services, GLOC was at the top of my list. GLOC offers a wide variety of classes. In addition to obedience and agility, the club also offers specialty classes in flyball, musical freestyle, tracking, treibbal, and tricks.

As you can imagine, GLOC is a happening place. There was a lot of activity going on around me as I conducted my interviews. Classes were in progress in all three rings. Nearby, two club members were talking about upcoming trials. Others were talking about a new foster dog. If you’ve yet to try out GLOC, I suggest you sign up for one of its many classes. I’ll be writing about some of their other classes at greater length in the upcoming months.