When you live on a farm there’s abundant room for a multitude of pets, but when you live in a town or city the limited space allows for much fewer pets. This has been on the mind of a gentle-hearted lady whom I recently met. “Anne”* has rescued over one hundred homeless cats, but, now that she’s approaching sixty-five, she feels it’s time to find homes for her remaining cat clan before she needs to move into town.

I didn’t have any power to change things when I was little but now I can care for them to my heart’s content. 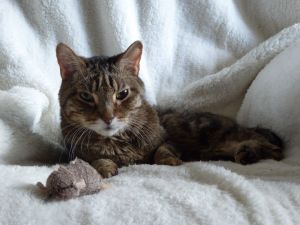 Anne’s compassion for animals began as early as age four. Her family lived in a small town on a busy highway. She saw a cat in their yard and wanted to pet it, but the cat ran away and was struck by a car, an experience which Anne found traumatic. Soon after, Anne noticed some kittens coming and going from under the porch of an abandoned house. She tamed one of those kittens, whom she called Cinnamon, and her parents let her take him when they moved. At the new farm, Anne often fed table scraps to the stray cats that were continually drawn to the outbuildings One time a cat went missing and she found his body in a tree; the rest of the cats never were all that healthy. Anne believes that all these “harsh experiences” led her to become a cat rescuer.

I have always loved animals!  I thought we were going to get horses, cats, dogs, everything, but it didn’t work out that way.

Since 1985, Anne has lived on an acreage, where she’s continued to see more of the same lack of awareness by her neighbors of how to care for cats. A volunteer at The Cat House since 2007, Anne has learned so much through them and her vets. “I’m doing a much better job of taking care of my cats than when I started.” After a litter of kittens in her care died because they were “full of worms,” Anne’s vet told her to have her animals neutered. The advice propelled Anne into action. Not only did Anne heed the advice, but she also started a Trap-Neuter-Release program with local community cats. In addition, she began helping her neighbors get their cats altered and current on shots, paying the costs herself when needed. She’s helped even strangers with their cats by donating to All Feline emergency funds.

Highlights are when a feral kitty trusts and loves me! Finding good homes! Knowing that my cats would not be alive if I hadn’t helped them. 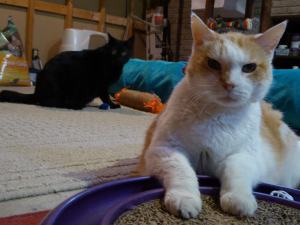 Naturally, when word got out of Anne’s willingness to rescue cats, people started turning to her when they saw a cat in need. To every cat that came her way, Anne gives housing, heated beds, premium food, and water. The cats are current on vaccinations and receive vet visits too. Anne spares no expense or effort. She’s daily fed cats, scooped litter boxes, and washed dirty laundry. Anne also takes time to pet and play with each cat in her care. “It takes about two hours a day to care for them.” As for the bills, let’s just say that Anne has spent thousands each year.

I have a great deal of knowledge and can offer advice to others.  I often don’t realize how much I have learned until I start visiting with others.

In addition to the time and cost involved, another major challenge has been deciding how far to go with medical treatment. While often her cats’ needs have been straightforward and reasonable, Anne’s also had quite a few die from cancer, kidney, liver disease, etc. She told me of ten-year-old Scout who had a heart attack, an experience which shocked her. Anne used to bury the cats she lost, but now has them cremated.

I want to place as many as possible, so that I’m not out in the cold and ice and snow in five years. I keep taking care of them because no one else will, but I don’t have a safety net if something happens to me. 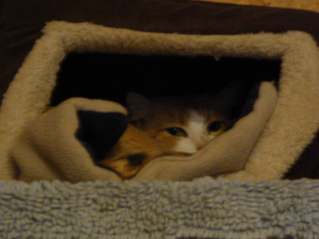 While Anne has enjoyed the opportunity to care for cats the way she wants, it’s also been a daunting experience, and now she’s reaching out for help. “I’m 63, and would like to have my numbers way down within five years. I’ve rehomed most, but still currently have around twenty cats.”

This gentle-hearted lady, who only wants to see every homeless cat with a loving family, has reached the place that many rescuers do: she’s maxed out in space and expenses. Anne does intend to keep the oldest and the ones with medical issues, but the rest she’d love to find homes for. That’s where you can help. Anne has used local PetSmart stores, The Cat House, social media, and word-of-mouth to reach potential adopters, but needs more cat lovers to help her find adopters. 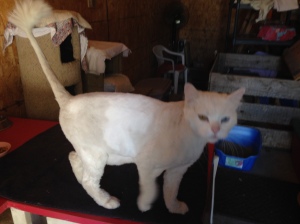 At a recent Best Friends symposium that I attended, the presenters encouraged animal welfare advocates to work together. Since I’ve started blogging for Lincoln Animal Ambassadors, I’ve met many people passionate about homeless animals but who often work as individuals. While they do save many animals this way, if everyone united for one common cause we could save even more. The slogan for Best Friends Animal Society is “Together we can save them all.” Let’s follow their lead and unite as animal rescuers.

You can make a difference by contacting me if you’re interested in adopting any of Anne’s cats.  Anne herself wishes to stay anonymous, because she’s trying to retire from the cat rescue life. One of her charges that she’d like to rehome is Louis, a sweet and mischievous cat who’s front-declawed. Although he’s happy as an indoor cat, he’d do best as an indoor/outdoor cat because he also likes to spray outside. An approved home would be a single-family dwelling with a privacy fence.