Megan has a big heart for homeless animals. She also believes in having animals spayed and neutered. For that reason, she’s grateful for the assistance she’s received from Lincoln Animal Ambassadors.

By this time, I realized Sam was very pregnant. I didn’t want another litter after her first, and so I set up the appointment to have Sam fixed as soon as possible after the babies were delivered and I got clearance from the vet saying she was ready. 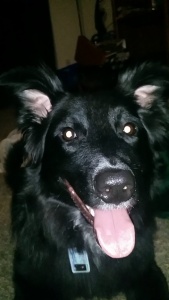 In July 2012, Megan found a skinny, scarred dog wandering the streets. Without hesitation, she brought the Black Lab/Chow mix home and posted ‘Dog Found’ signs. When no one came claimed the dog, Megan took Samantha to a veterinarian for a check-up There, she learned that Samantha was about 18 months old and perhaps a Black Lab/Chow mix. Later that fall, Megan was dismayed when Samantha, who was in heat, got out of the house. After being reunited with Samantha, Megan soon noticed that Samantha’s stomach was getting bigger. Yes, Samantha was pregnant. Through a friend, Megan heard of the Lincoln Animal Ambassadors pet food bank. Megan applied for help because she wasn’t earning enough with her part-time at a fast-food restaurant to care for the puppies that would soon be born. After receiving support a few times from the pet food bank, Megan learned that Lincoln Animal Ambassadors also offers low-cost spaying/neutering. Early 2013, Samantha gave birth to a litter of seven puppies and, with the help of Lincoln Animal Ambassadors, Megan had Samantha spayed. 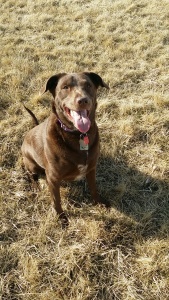 In August 2015, Megan’s boyfriend saw a Facebook post from a friend saying he could no longer keep his one-year-old dog. Megan, being a “softy”, contacted the dog’s owner and said that they’d foster the dog and find him a new home. Bandit’s previous owner told them that if he was able, he’d like Bandit back, and so Megan and John told him that they’d hold Bandit for 30 days (as required by Lincoln Animal Control) before attempting to re-home. In the meantime, Megan found herself beginning to bond with Bandit. “I don’t live in the best neighborhood, and so being a 23-year-old woman, letting my dogs out alone at night was pretty scary until Bandit came along. Bandit became attached to me and my three other dogs within the first week.” When the thirty days passed, Megan knew she eventually wanted to adopt Bandit, and so she made another call to Lincoln Animal Ambassadors.

Lincoln Animal Ambassadors is so fantastic! They got me on the spay/neuter list as soon as possible. 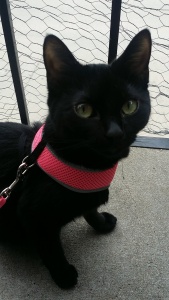 In recent months, Megan has also been rescuing cats. On March 23rd, John was letting the dogs out, and a little orange cat came up to him. He tried to shoo the cat away once the dogs started to notice it, but the cat kept coming back. John took the cat inside with the dogs and fed it. When Megan got off work, she and John took the cat to Parkview Animal Hospital. There, they learned the kitten was an unaltered male and about four and a half months old. Megan used this information to report the kitten to animal control, post “Lost Cat” sign on Lost Pets of Lancaster County, and other Facebook pages. While all this was going on, a former coworker of John’s asked him about rehoming her young cat. Naturally, Megan and John agreed to take Bitsy “At that point, I had an unaltered male and female cat, and it became an urgent situation to get them fixed as soon as possible before I had a litter of kittens on my hands. So, I reached out again to Lincoln Animal Ambassadors for help.” Megan set up an appointment for right after the 30-day waiting period with the orange kitten, now known as Scotch, and got both cats both fixed on the same day.

My last rescue hasn’t involved LAA, and mostly likely won’t, but she was one of my more interesting rescues, and so I feel like she should be included. 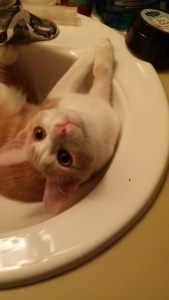 Megan’s most current rescue is Babs. On April 18th, some neighbor kids were gathered around a car in the parking lot of an apartment across the alley from Megan’s residence. When Megan went over to investigate, she discovered there was a rabbit under the vehicle. It was obvious to Megan that it was someone’s pet and not a wild rabbit. It took her over an hour to catch the rabbit, and then she immediately headed to her vet. “I wasn’t expecting her to be chipped but I tried. They said she had no chip and is a female Lionhead bunny.” Megan borrowed a cage from a co-worker and is fostering Babs while looking for her owner. She’s reported the rabbit to animal control and posted on the missing pet pages, but no one has claimed Babs yet.