Thirteen years ago, a one-year-old Siamese mix needed a Good Samaritan. He found one with the Dickinson family. Trishia’s husband, Gerry, was outside braving the sweltering heat and painting a garage for an elderly woman when a malnourished cat approached. Head swollen from ear mites, the cat tried to walk up to Gerry. Too weak, he wobbled and then collapsed. Immediately, Gerry brought him back to their air-conditioned home, and got some water and food into him. Then Trishia and Gerry contacted Animal Control and even went door to door in the neighborhood in search of his owner. When no one came forward, the couple took the grateful cat to the vet, to have him evaluated, treated, and neutered.

We could tell Tommy was a special kitty from the moment we met him. You’ll never meet a kinder soul. He loves everyone—cat, human, dog, doesn’t matter.

The couple quickly welcomed Tommy into their life. They took him on several road trips, along with their other cat Callie. Tommy made Colorado trips with the family to Trishia’s grandma’s house four times, and has also been with the couple to Oklahoma. The two cats “do wonderful on road trips and in new situations!”

Tommy’s always up for meeting and greeting strangers. Even my friends that don’t care for cats, absolutely love him. He’s 100% pure kindness and love.

Tommy also quickly made himself a responsible member of the family. Shortly after the Dickinsons rescued him, they took in a pregnant stray, and the two cats bonded. “Momma had her litter in our bathroom and I kept her and the babies in our bedroom behind closed doors to keep her safe. One day I accidentally left the door open and Tommy came in.” Instinctively, Trishia bent to pick Tommy up, but he headed straight to the kittens and proceeded to groom each of them. “With his help, Momma had no problem at all.”

For most of his life with the Dickinson family, Tommy was the picture of health. Then four years ago, he banged into the deep freeze. Trishia examined his eyes, and thought they didn’t look bad, just maybe a little cloudy. At the vet’s office, however, Trishia was told both eyes had lens luxation. (This is when the lens goes out of position, which reduces the flow of eye fluid out of the eye, leading to fluid buildup and glaucoma.) “We have no idea how or why it happened. There is nothing one can do to fix it.” Trishia took Tommy to a specialty doctor who prescribed eye drops to be administered twice a day. She followed this procedure for many months, until it was clear that Tommy’s eyes were getting worse, and then it was back to the vet.

I really wonder if anyone would notice that he is blind if they didn’t know already.

To prepare their home for a blind cat, the couple made some changes. “For the most part, we just looked at everything with a different eye, for areas where Tommy could potentially get hurt.” They blocked off areas where he could get hurt, such as the basement stairs. Otherwise, they tried not to change anything. If they bring something new into the house, they first let Tommy check it out thoroughly. 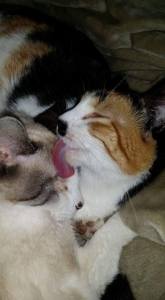 When I asked Trishia how life has changed because of Tommy’s blindness, she stressed not to overlook a cat just because of its blindness. The couple didn’t face any extra expenses related to Tommy’s blindness other than the initial surgery. They have rearranged their house somewhat, but not in a way that proved inconvenient, and Tommy adapted easily to his new life. Trishia does recommends not letting a blind cat roam outside, but that’s the best practice for any cat. So are the supervised backyard outings and the catio the Dickinsons built for their household of cats.

Thirteen years ago, an emaciated and dehydrated cat came to the right person for help. Now, despite his blindness and other issues brought on by old age, he’s a much healthier and happier cat. He spends his days cuddling with the couple’s other pets—including two dogs, lounging in the catio, and going for supervised backyard outings with Trishia… This is his forever family, thanks to a Good Samaritan.

Editor’s Note: Trishia shared Tommy’s story with me this past May. I was saddened to hear in June that Tommy had crossed Rainbow Bridge. This article is dedicated to all homeless cats and to all the Good Samaritans who show them love.

I lost a huge part of my heart today. We’ve had Tommy for almost 14 years. He was my road trip partner and loved visiting Grandma in Colorado. I never met anyone who didn’t love him. He had a nurturing, motherly way. He helped Momma care for her kittens, picked up baby bunnies and carried them around and cared for them until we could find where they belonged, and had the sweetest soul I know. There will never be another Tommy.