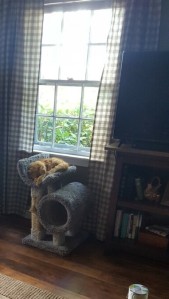 It all started after the move. Pumpkin, a formerly-outdoor cat for nearly a decade, needed to get used to life indoors.

But was it possible?

He had been used to roaming outside for hours on end, pretending to hunt squirrels (and never catching anything), and meeting up with his neighborhood girlfriend/arch-enemy named Rocky. Although we always forced him to sleep inside (ever since the “lost for nearly two weeks” incident of 2015), he would wake up in the morning, meowing insistently to be let outside.

Not surprisingly, his transition indoors started off disastrously. Let’s just say there were a lot of bodily functions going on outside of litter box. And the poor couch…it was being destroyed daily by Pumpkin’s frustrated claws.

So I decided to do some research on how to ease the transition, and discovered a magic ingredient to success: Catnip.

Previously, we gave Pumpkin catnip as a treat — the way it made him go wild and then collapse was pretty adorable. To spoil him, we even tried growing catnip inside, but he destroyed the poor little sprout. I never thought, however, of using catnip as a training tool.

First of all: What is catnip?

Did you know that catnip is actually a herb that’s part of the mint family? According to the Scientific American, it originates from Europe, Asia and Africa, and early settlers brought it to North America. The Pilgrims (the Thanksgiving ones) grew it in their gardens for medicinal purposes and appropriately called it “Cat Mint.” Its official plant name is “Nepeta cataria.”

Have you ever wondered why cats love catnip?

It’s a sex thing. Really. The oils in the catnip act as an “artificial cat pheromone,” which in turn excites the cat and triggers the crazy-happy “high” that you’ve likely witnessed. No wonder cats love it!

But is it dangerous?

Thankfully it’s completely safe and non-addictive. Sure, your cat might collapse in a love-drunk stupor, but it’s all good fun. That means you can rest assured that training your cat using catnip won’t do her any harm.

So how will catnip help me train my cat?

Before you go out and try these tricks yourself, keep in mind that only 70-80% of cats are catnip-junkies because only some cats have the “catnip gene.” So if your feline friend is in the minority, you may need to try other methods of training. For those of you willing to try, here are four ways catnip can help you train your cat:

It redirects poor behavior. For example: My poor couch was Pumpkin’s scratching post. That is, until I purchased a real sisal scratching post and covered it in dried catnip. The post was more satisfying to scratch than the sofa, but it was the catnip that made him want to try it out. Without it, Pumpkin might have kept to his old ways.

It attracts a cat’s attention: I had to make our home more interesting if I was going to convince Pumpkin it was worth staying inside. So we bought him a cat tree. But as you know, cats can be particular about what they like. That’s where catnip comes in: Even if your cat thinks she’s too good for a new perch, sprinkle it with catnip to make it more appealing.

It encourages exercise: Maybe your problem isn’t unruly behavior, but a lack of movement altogether. If your cat is struggling with his weight and the vet has encouraged you to do something about it, catnip can jumpstart playtime. Whether you purchase catnip-filled toys or just sprinkle it on something you already have, it will make playing (and therefore, exercising), much more exciting. It might get your lazy cat to roll around and work off a few calories.

It shows your cat you love him. We all love our cats and want to treat them. While buying food-related treats can be fun, too much can cause your cat health problems in the future. With catnip, on the other hand, you can make Whiskers’ day without dealing with the unwanted side-effects. What does this have to do with training? Letting your cat know you love her pays off. It might not fix all your behavioral issues, but at least she knows you want to spoil her.

I’d like to say that after a couple of months of catnip-training, Pumpkin is perfectly content with being indoors, but that’d be a lie. He still hankers for his wild-child outdoor days, but we are making strides in the right direction — all thanks to catnip!

Tell me, have you tried using catnip with a purpose? Has it worked? Share your successes (or failures) in the comments.

Natalie rescued Pumpkin when he was just a days-old kitten. He was the baby of a stray cat that lived near her uncle, and after a decade of living outdoors, Pumpkin is now transitioning to a safer and quieter indoor life. Natalie writes over at Leaping Cats, discussing ways to keep your indoor cats fit, healthy and happy.

If you are a pet owner with writing skills, Lincoln Animal Ambassadors would love to hear from you! We’re especially looking for content about birds, exotic animals, and horses. Content may take the form of an advice column or how-to articles. You may even simply wish to act as an expert consultant. If you are interested, please check out our Author Guidelines.