As reports continue to air of dog attacks attributed to pit bulls (even when the breed has not been proven), there is no better time to honor National Pit Bull Awareness Day (NPBAD). Now more now than ever, we need to educate the public about faulty stereotypes and bring positive attention to the pit bull. 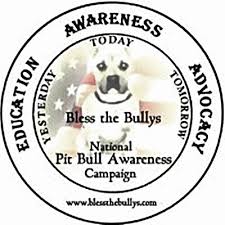 National Pit Bull Awareness Day was started in 2007 by Jodi Preis of Bless the Bullys, a pit bull rescue group in Tennessee. An annual event that takes place on the last Saturday in October (unless Halloween falls on the last Saturday and then another date is chosen), the day is designed to restore a favorable image of the American Pit Bull Terrier. According to the NPBAD website, despite an overall enthusiastic reception, Preis initially received criticism for using the generic term “pit bull” in naming the nationwide event. The website goes on to explain that the term was deliberately chosen, recognizing that “pit bull” is the name most familiar to the public and has a negative connotation. Other than this criticism, National Pit Bull Awareness Day was eagerly embraced as an opportunity to “educate, change minds, and bring positive media attention to pit bulls across the country all on one day”.

Granted, the initiative has an obvious bias. And so one of the first ways you can best pay tribute to National Pit Bull Awareness Day is to educate yourself about the breed that prior to the 1900’s was not only considered “one of the most popular breeds, highly prized by a wide variety of people” but was even labeled as “America’s sweetheart breed, admired, respected and loved”. Now many communities have bans against pit bulls on the grounds that the breed is too dangerous. How did pit bulls go from beloved to reviled? Is that a fair or unfair reputation? You can find out by reading LAA’s articles on the topic.

Once you’ve informed yourself, below are several ways that you can help restore a favorable reputation and save thousands of pit bulls and pit bull look-alikes (medium-sized dogs with blocky heads are often labeled as pit bulls by default) who are euthanized in our shelters for no other reason than their appearance.

Volunteer with Pit Bulls: At many shelters, pit bulls and pit bull mixes make up the overwhelming majority of the canine population. You can visit the shelter to help exercise and socialize the dogs, which will not only make their lives more bearable while at the shelter but also make them more adoptable to visitors.

Educate Others about Pit Bulls: Inform the public about the breed’s rise to fame and unwarranted fall from glory and explain the inaccurate myths about them. Just as importantly, share stories about famous figures who owned pit bulls and current videos of young people with heroic pit bulls. Be cautious, however, that as part of elevating pit bulls the perception of another breed doesn’t get soiled. There’s abundant and sound research to suggest that owners who build a caring relationship with their dog, treat them as pets instead of using them to guard or fight, avail of spaying or neutering themselves, and invest time into training their dog will ensure their dog is confident, gentle, and trustworthy. No matter the breed!

Combat Damaging Media and Legislation: The media thrives on sensational stories, but pit bills are being mistreated and dying daily because of their bully reputation. Make a difference in their lives by putting the truth out there instead. Reach out to politicians too, by letting them know you care about animals and want to educate people about the misinformation that exists. Take specific action by signing petitions to show support for pit bulls and by protesting against dog fighting and breed-specific legislation. The ASPCA recommends its Advocacy Brigade.

Help Pit Bulls find Homes. A simple gesture would be to add an adoptable Pit Bull search widget to your online presence. Should you talents lay on the creative side, you could also photograph and write bios for dogs needing homes, and thereby gain them much-needed favorable attention.

Foster or Adopt a Pit Bull: A study by Animal People reports that there is only a 1 in 600 chance that a pit bull who even manages to find its way to a shelter will find a forever home. Obviously, the pit bull needs our help. According to the United Kennel Club, the American Pit Bull Terrier has a lengthy history as an active, agile, and muscular breed. Its essential characteristics are confidence, strength, and enthusiasm for life. In addition, UKC notes that American Pit Bull Terriers make excellent family companions and have been well-noted for their love of children. Of course, as when deciding on any pet, research is needed to determine the best fit.

Make your Pit Bull an Ambassador: The ASPCA notes that the best way to combat negative stereotypes is to set a positive example. You should take your well-trained dog for walks to show people the calm and gentle side of pit bulls. In addition, having your dog earn an AKC Canine Good Citizen certificate may come in handy when facing breed bias from people who don’t understand the good that pit bulls can do. Finally, ambassadors can predispose younger generations to positive pit bull images so that their future interactions can be positive ones.

Knowledge is power, and with education and advocacy, the truth will save lives in terms of negating the fear and bias generated by the media, circumvent knee-jerk reactions such as breed bans, and the truth will result in fewer pit bulls ending up in animal shelters.—NBDA

What will you do today to help the pit bull?