When one grows up with pets–ranging from rats to horses–one’s entire life, chances are one will  remain an animal lover. Moreover, you’ll probably seek out a career working with animals. For Kim Kempkes, both are absolutely true. She currently has eight cats and three dogs of her own, as well as two foster dogs. A few years ago, with the goal of running an animal rescue, Kim graduated from Southeast Community College with an Associate’s Degree in business administration and from Animal Behavior College with a certificate in dog training.

On the way to starting a rescue, to raise funds, Kim decided to operate a business which focuses on animal care. She and Sarah Thompson founded Brynn’s Critters in October 2013 “as a pet-centered pet services company that offers pet walking, pet sitting, and basic obedience training”. Thank to Kim, who took time to answer questions through email and to meet with me in-person.

ALLISON: How did you feel when you started your business?

KIM: There were so many emotions! I was both excited and petrified. On some level, I knew that I could do it, but starting a business means that you’re the person doing everything for every department, and that means constantly being outside your comfort zone. But I’ve always wanted to work with animals as a profession and so this is my dream job!

I was also confused about what to do first. From my schooling, I knew the steps it would take to start a business. But all of the instructors said one of two things when I asked for a concrete list: 1) You do them all at the same time or 2) It depends on the business. Not helpful!

ALLISON: What lessons have you learned?

KIM: Starting a business can be hard! I don’t want to quit, but when I get completely overwhelmed, I sometimes run away. I’m now anchored. I tend to feel that I should do everything myself. I have phenomenal resources around me at Southeast Community College’s Focus Suites, but that only matters if I actually use them. I have gotten better over the last year at utilizing those resources.

ALLISON: What are some mistakes you’ve made?

KIM: Initially with training, I tried to have people pay as you go with training. I would say that I think this will take 4 lessons, but you can pay for each lesson at the time of the lesson. People would take one or two and then quit. Now, payment for all lessons is due at the time of the first lesson. The problem was that the dog can’t get what he/she needs from 1 or 2 lessons. People think they can do it themselves after that. I worry about whether the dog could get what it needs out of that.

ALLISON: What is a memorable moment? 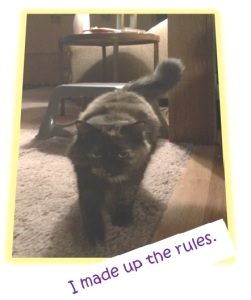 KIM: I was hired to help a woman with Alzheimer’s care for her cat. The family had recently adopted the cat from the Capital Humane Society. The cat was having some health issues and so I helped with that. In spite of my best efforts, the cat and the woman became more and more miserable. The cat was yowling at night and started having accidents out of the litter box. The woman didn’t think the cat liked her. The woman asked me to take the cat back to the Capital Humane Society. Because of the cat’s health issues and litter box issues, I worried that the Capital Humane Society would decide this cat was not adoptable, so I got permission from the owner to take the cat home instead.

After bringing her home, I realized that she never came to me when I went downstairs and that she’d meow loudly as if startled when I touched her. One day I noticed that she didn’t even twitch when we popped some large air-filled packaging tubes. We had to be within five feet of her when we popped them or she didn’t respond. I realized that she was hard of hearing! Every time someone approached her from behind and touched her, they were scaring her! I now flicker lights or go around so that she can see me before I touch her. She’s become very affectionate.

ALLISON: What is a funny memory?

KIM: There are so many, especially when animals are involved. Oh, I have one! I foster for Heartland German Shepherd Rescue (HUGS) of Omaha. One of the first fosters that I cared for was a male Shepherd who was about five years old. His owner left him in the back yard alone all the time. The dog started jumping the fence to go explore which was upsetting neighbors. The owners were afraid that the dog would get hurt, so they surrendered him to HUGS. I became the foster because I was the only volunteer with a six-foot fence around my entire yard.

When I took him for walks, he’d try to walk me. My shoulder started getting super sore and I finally had had enough. I was using a martingale collar on him. I moved it up behind his ears and shortened the leash to give me more leverage. About a block later, I felt warmth on my left ankle. The dog had peed on me! He then settled in next to me and was a perfect gentleman for the remainder of the walk. This happened THREE times before he stopped!

ALLISON: What is an embarrassing moment?

KIM: I love to work with high energy, independent dogs that are just difficult to train. They have minds of their own. I absolutely love them, but am also often embarrassed by their rowdy behavior. My almost two-year-old mixed-breed loves to jump! He jumps as high as he can to try to lick your face. He did that to the instructor in a class one day. I felt mortified! I know that many people think that trainers should have perfectly trained dogs, but you really can’t rush the dog. You have to train them at the behavior they’re at and sometimes that has little to do with the trainer’s skill and more to do with the maturity and/or the excitability of the dog.

ALLISON: What have you learned about animals by running a pet business?

KIM: Animals are so very in the moment. They’re open to doing things differently and just moving on.

Most so-called “bad” behaviors that we don’t like such as jumping, mouthing, clawing, climbing, and  counter-surfing are natural and fun behaviors for the animals. They aren’t doing it to make anyone angry.

* Corollary: What have I learned about people since I started this pet business?

A lot of pet training is really people training. My job is to explain to people how to communicate with their pets. Pets don’t know English. They also don’t frequently use verbalization to communicate with other animals; they use body language. Once you understand how that particular pet communicates, you can emulate it. When pet and person understand each other, magic happens.

Also, many people don’t follow through on training. I know they’re busy but, if they don’t follow through, nothing will change. To that end, I try to make it simple. I suggest train during commercials about two to five minutes at a time, multiple times a day. I also give homework sheets and written explanations of everything that I teach.

ALLISON: Sell my readers on why they should use your business.

There are so many philosophies out there. Mine consists of rewarding good behavior and ignoring undesirable behavior. I’m greatly saddened when I hear trainers wanting to use choker, prong, or electronic collars as a first choice. If you train with positive methods, your dog will want to work with you. They will enthusiastically offer behaviors (sometimes hilarious ones) that have gotten them rewards in the past. When correction-only techniques are used, dogs tend to shut down. They don’t offer any behaviors, because they focus on avoiding the correction.

The other issue with using mostly corrections is aggression. I have two dogs who tend to fight back if they’re hurt or scared. Constant corrections or over-use of corrections on these types of dogs can result in aggressive behavior toward the owner or trainer. With positive methods, I get a happy dog that loves to work with me and loves to interact with dogs and other people. I get their trust so that, instead of being reactive and fighting back, they look to me when they don’t know what to do .

I love animals and will only hire people who love pets. When I extra time to spend with pets in my care, I often do, and they’ ll get as much attention as they want for the time that I’m there.

ALLISON: Where do you hope to see your business in five years?

KIM: I have immediate goals and long-term goals right now. I’m hoping to get a facility to work from next year and to add grooming and boarding to the services that I already offer. I also want to grow the facility to have a pool and add agility training.

My even longer-term goal is to have 25 to 50 acres with a training facility, veterinarian, and rescue operation. The rescue would take in any domestic animals that I can legally hold there. Starting this fall, a percent of all of our sales will go toward starting that rescue!