It’s been a long week. You’re ready to relax, kick back, and Netflix ‘n chill…

Hey, why not? Nothing’s better than snuggling with your furry, scaly, or feathered pal after a tough day at work!

If your house is full of animal lovers, then you may want to take some notes. We’ve scoured the Netflix catalogue and have found the top 50 titles for all the dog people, cat people, and other animal fans in your life. These shows and movies are sure to make you laugh and bring out all the “Awwwws” you’ve got. Plus, they’re a great way to learn some interesting things about animals from around the world.

Family friendly, educational, and entertaining. Make the most out of your next family movie night with one of these awesome flicks. 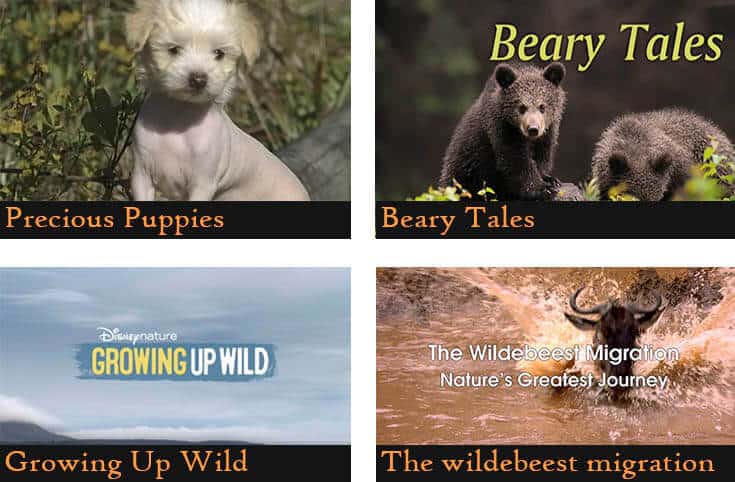 At just under one hour, this film takes you into the lovable world of canines. Get a “day in the life” peek at tons of different breeds as they work, go to obedience school, and star in movies!

When a wildlife photographer discovers two abandoned bear cubs in the forest, he’ll learn what it’s like to play Mama Bear as these two rambunctious ones grow.

This 2016 film follows five baby animals from all corners of the world as they come into their own among the help and protection of their animal families.

This incredible documentary showcases the migratory journey of wildebeests, a life-or-death struggle for survival. 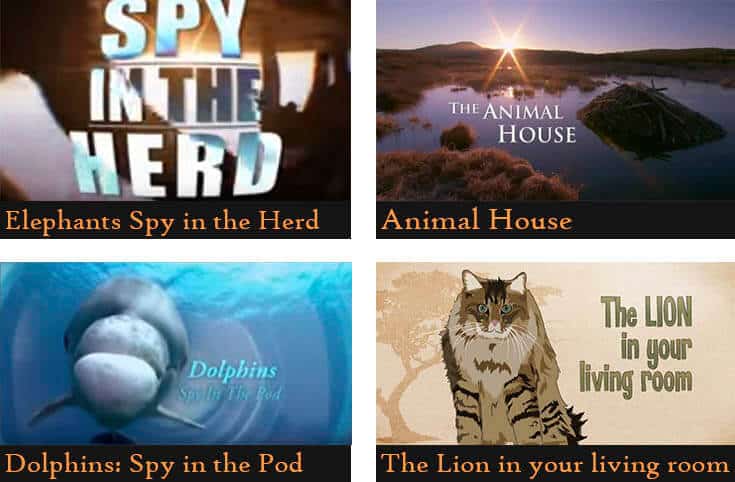 5. Elephants: Spy in the Herd

Filmmakers hide their cameras to capture private and rarely seen events in an elephant herd’s day-to-day-life.

6. Dolphins: Spy in the Pod

Want an up close and personal look at some of the most intelligent creatures of the ocean? The filmmakers of this documentary hid their cameras as sea creatures to capture precious and rare film of a playful dolphin pod.

Humans aren’t the only species that care about architectural design! This documentary showcases some of the amazing nests, burrows, and other ingenious structures that animals call home sweet home.

8. The Lion in Your Living Room

Ever wanted to learn more about the common house cat? This film explores the mysteries and histories of the domesticated feline… so be sure to watch this one with your furball snuggled up to you close by!

9. Hunt for the Super Predator

If you like learning about sea creatures and aren’t afraid of getting a little spooked out in the process, this documentary should definitely be added to your Favorites List. 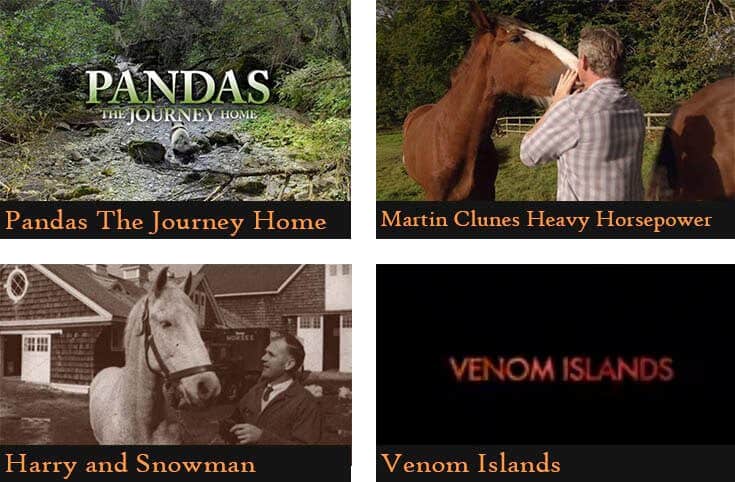 Horses are incredible creatures. This film will teach you about the amazing work capacity of these gorgeous animals.

Be amazed by these prehistoric looking creatures featured in this 45 minute film.

What’s better than pandas? For a cute and clinching tear-jerker, watch this movie to see what happens when pandas bred in captivity are prepared to be released in the wild.

A historic look at what it takes to lead a horse to a championship in show jumping. 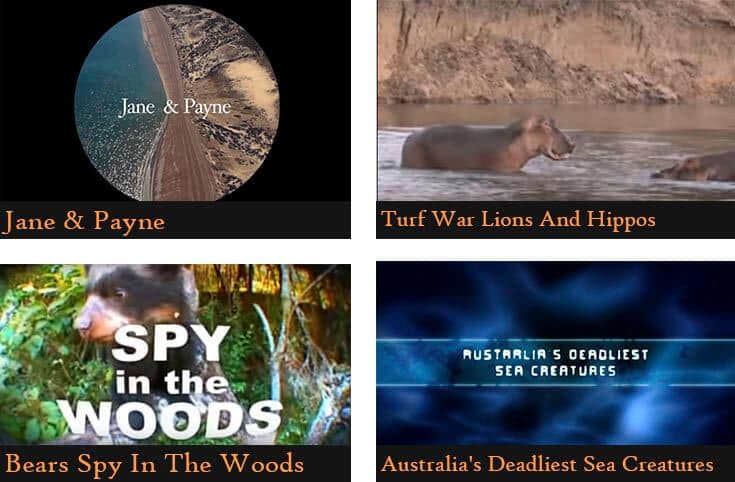 These two bosses of the African wilderness battle it out to establish a territorial claim and the right to survive.

Europe is a diverse part of the world. This documentary takes you smack inside the unbelievable habitats of this gorgeous continent.

Both known around the world for their expertise in primates and whales, respectively, this film documents the illustrated careers of Jane Goodall and Roger Payne.

Get a closer look at the secret life of grizzlies, pandas, polar bears, and other ursine species.

You may be a little spooked in the water after watching this documentary about octopuses, crocodiles, and other Aussie ocean swimmers! 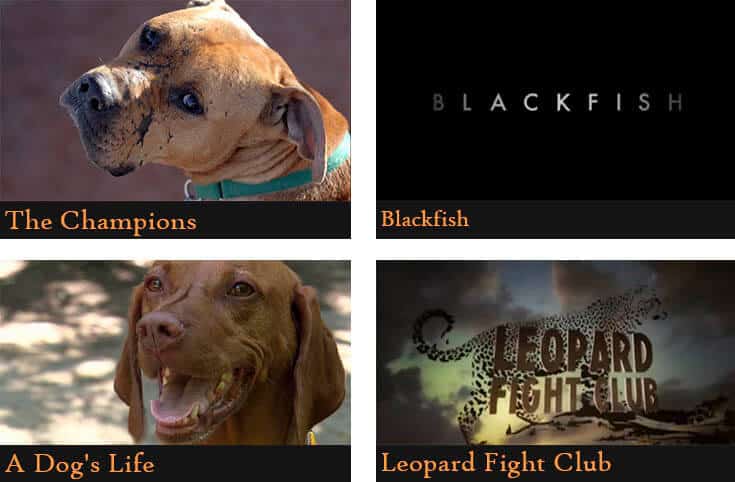 From cub to cat, a leopard must be strong to survive. This documentary allows you to witness the process!

Bring your tissues: this one’s a tear-jerking documentary following good people who are trying to save good dogs from a dog-fighting ring.

Wonder what it’s like to be your dog? This documentary will help you see the world from your canine companion’s point of view!

This is an infamous and disturbing documentary that warns about the dangers of whales kept in captivity. Viewer discretion advised, and mature audiences recommended. 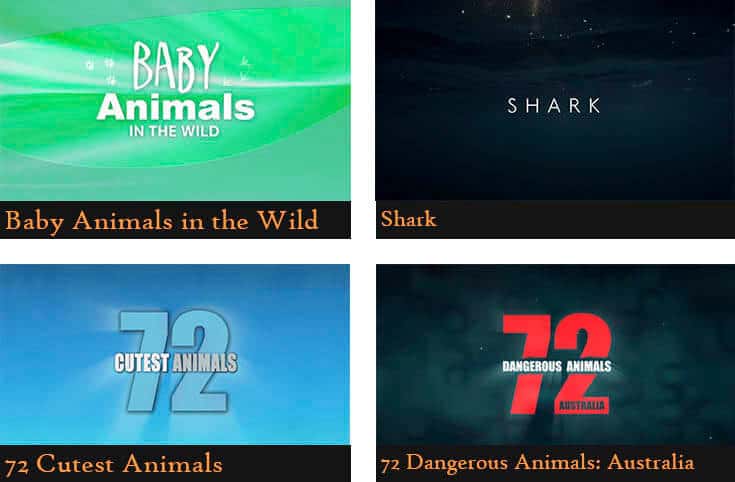 23. Baby Animals in the Wild

Witness young animals from around the world take their first steps, learn to fly, and figure out what it means to be out and about in the wild. Episodes feature baby polar bears, elephants, grizzly bears, koalas, gorillas, deer, foxes, whales, and more.

The Land Down Under is known for being home to some pretty creepy critters. If you’re into scary movies, watch this single season that features interviews with animal experts and survivors of close encounters with snakes, sharks, spiders, and more.

Okay, if the last flick freaked you out, calm your mind with these six dozen animals who are just adorable creatures from head to paw (or claw!).

If Shark Week isn’t long enough for you, then this short series could give you just what you’re looking for! Learn all about these powerful ocean predators and help dispel the myth that sharks are “bad.” 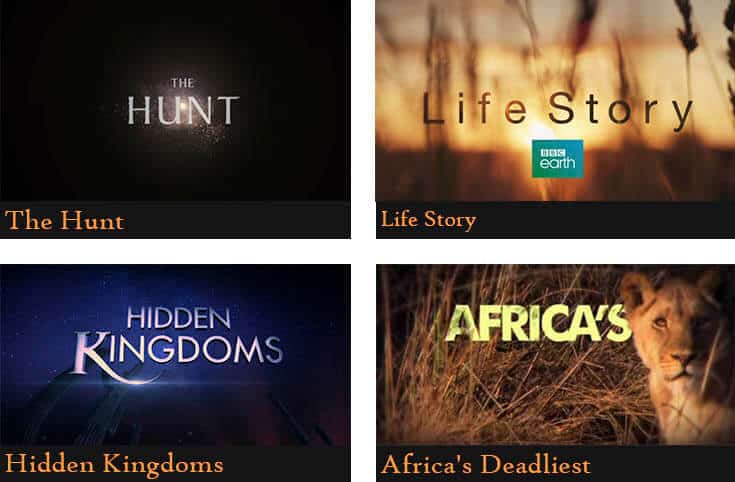 Predatory animals are something to be seen. They’re fast, cunning, powerful, and agile. See the circle of life in action with episodes featuring polar bears, leopards, and other hunters.

The lives of animals can be as complex as our own. This documentary series gives viewers an inside look at survival in the wild habitats of creatures from around the world.

See the animals you never see! This series gives you a close-up view of a miniature world.

Leopards, lions, and other prowling predators make their debut in this film about some of Africa’s stealthiest and most elegant hunters. 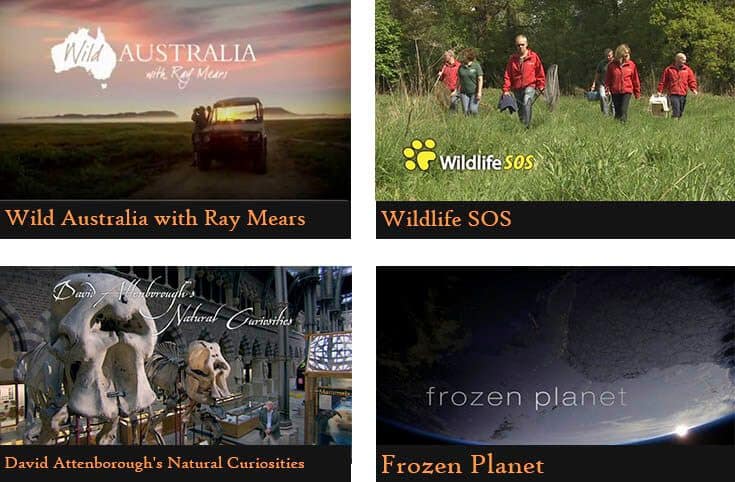 Take a tour of the past with this 3-season show highlighting some of the most interesting evolutionary behaviors and traits.

The North and South Poles have a lot of mystery around them, and their native flora and fauna do not fail to wonder in this intriguing 1-season series.

Do you love creepy, crawly, cute, or cuddly? How about all of the above? Learn interesting facts about wild animals from across the globe in these episodes.

See what it would be like to be on this unique island, home to some of the world’s most unusual creatures.

The Wildlife Aid Foundation helps injured and ill animals recover safely and return to the wild. You’ll want to cheer these people and animals on!

This fearless explorer takes you to the most out-of-the-way places in Australia to let you wonder, as he does, how they survive and thrive. 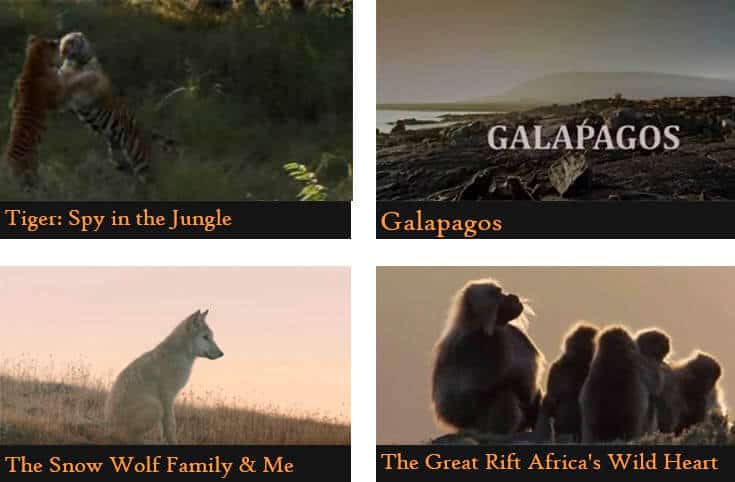 Ever wonder what it’s like to interact with a remote pack of wolves who have never seen a human being before? That’s what Gordon Buchanan finds out in this heartwarming and thrilling documentary.

East Africa’s Rift Valley is a fascinating part of the world. The wildlife, both plant and animal, are stars of this 3-episode series.

A crucial part of history, the Galápagos Islands are home to some unusual creatures who have stood the test of time. See their unusual world in this 3-episode season.

41. Jack Hanna’s Into the Wild

Explore the world of animals with one of the most famous wildlife experts and enthusiasts. From snakes to elephants to penguins, you’re bound to see all your favorites!

Take another intimate view of animals when filmmakers conceal their cameras among this group of tigers in an Indian jungle. 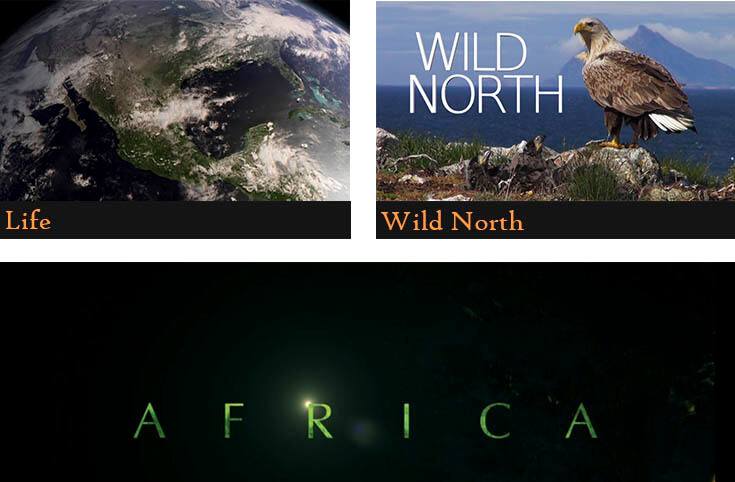 A poetic and artistic view of life existing against all odds. Learn about the evolution of animals and plants from around the globe in this documentary series.

Dig deeper into Africa in this 2-season nature show, featuring many of the African animals you love.

From the jungle to the ocean, Indochina’s animals shine in this documentary series.

What are some of the most exciting moments you’d love to see in the wild? A volcano? A bear fishing in the river? A whale breaching in the ocean? Consider this nature show a highlight reel from Mother Nature!

Learn about the plants, people, and creatures who find their home in the versatile Latin America region of the world.

Be transported to Norway in this documentary series showcasing some of the most intriguing wildlife in the Scandinavian country.

There’s no such thing as too many documentaries about African wildlife! This nature show takes you deep in the African jungles, deserts, and valleys.

Reprinted with permission from Mary and Dave Neilson, FelineLiving.net. This article is original in content and not to be reproduced elsewhere in any form. Copyright September 2, 2017.

FelineLiving.net started as a way for the Neilsons to create a single website where other new cat owners could find the answers to all their questions. It’s your one-stop shop for all things cat and kitten! If you’re feline lovers, then you want the absolute best for your four-legged friend. FelineLiving.net has tons of information about how to best care for your feline throughout every stage of life. From toys, nutrition guides, product reviews, behavior tips, and up-and-coming cat news,  FelineLiving.net has you covered.