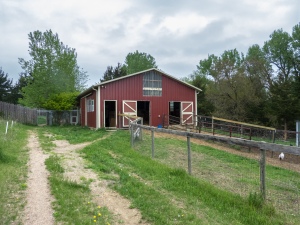 As soon as Bev released Luna from her dog kennel, the black two-year-old dog raced about the fenced grassy field. She darted up to Andy and me, her tongue out. Then she jumped on us and eagerly licked our hands. When Bev directed the Labrador Retriever/Border Collie mix to sit, Luna posed for a photo and then flopped on the ground for a belly rub.

The sun beamed above our heads, on one of the first clear days of spring in Nebraska. After months of waiting for a free weekend with good weather, Andy and I had finally made the drive in early May to the Sacks’ farmstead in Palmyra, which is also the site of also the site of Good Dog Rescue, founded in 2009 as a mixed-dog rescue.

Upon our arrival, several large excited dogs greeted us from behind a fenced yard. We were also soon welcomed by a gray-haired soft-spoken lady in t-shirt and jeans. Bev smiled broadly and adjusted her glasses, as she explained that the dogs—piled up at the gate, clamoring to meet us—were rescue-fails. They were dogs that for reasons of behavior or age had been deemed unadoptable, and so would have a permanent home with the Sacks.

Bev then led us along a footpath, past goats and wild guinea fowl, to a red barn that had been converted into a dog shelter. Several dogs raced back and forth in their kennel runs, eager to meet their visitors. “I could shop or gamble,” Bev said, “but I don’t. My time is taken with rescue.” On her shirt is the slogan, “Home is where the dog is,” and as Bev talks about the dogs in her care it’s clear how well she knows their individual needs and what type of home would fit them.

Bev first introduced us to Luna, who she said should be easily adoptable but hasn’t gotten much attention. “I don’t know if people are afraid of Luna’s activity level because she’s part border collie. She takes time to settle, and a potential adopter for her would be a person who wants to do agility and obedience. Luna isn’t a flashy dog, but she’s young and loves people.”

After Luna had her turn in the spotlight, Bev showcased her other dogs, one or two at a time.

Allie is Bev’s ‘hallelujah’ dog. The 36-pound beagle/fox terrier mix had been scheduled for euthanasia just before the Easter weekend, until Bev had intervened. As we talked about her, Allie ran about the grassy field and sprang through the high grass. Bev described her as “silly and fun,” but also a “rough and tumble player that loves people and other dogs.”

Next were Lennie and George, both terriers. They ran right up to us, then darted about the yard, then returned to jump on us, all the while grinning and wagging their tails non-stop. When Andy knelt to pet George, he jumped into his lap, and snuggled against him. I also had the chance to hold Lennie, who quietly cuddled with me and even gave me kisses! Bev called the two seniors, “the sweetest dogs I’ve known,” and said that both love going for walks, each other, and people.

Bev then introduced us to Max, a hefty 70-pound five-year-old, whom she described as a mix of “who knows what” but definitely some Sharpei. He chased after a red rope toy thrown by Bev, then a green rope toy, demonstrating his fetching prowess. According to Bev, there is “never a down day” for Max, who is always “ready to run and play.”

Next, we met Auggie, a young pit bull, whom Bev described as “having the prettiest coat color” and “being a different character.” Bev said that Auggie loves to chase sticks, rope toys, balls, just about anything. She added that he’ll often gather toys around him and then wait for someone to try to take away or throw one for him. Auggie came to Good Dog Rescue as a stray from a large metropolitan shelter and Bev thinks he’s never gotten much love, and so is jealous of the attention he does receive. During our visit, Auggie showed off his obedience skills, but also his ability to keep playing and playing!

In contrast to Auggie was Gatsby, a pit bull mix, who had been saved from euthanasia at a high-kill shelter. On one hand Gatsby’s a serious dog who stands at attention like a pointer. On the other hand, he tilts his head impishly for photos. Moreover, while Gatsby can sit for one minute without moving and show no interest in playing fetch, he loves a good belly rub and hanging out with people. Bev called him “a steady dog with a great personality.”

Next, Bev brought out Beethoven, who was relinquished when his owner died. “Beethoven was miserable when he came,” Bev said. “His eyes were red. His ears were infected. He had a bad time with mange.” Beethoven can also be a handful, being able to climb out of six-foot kennels. This German Shepherd/pit bull mix who was bottle-fed as a baby adores people, and Bev knows the right home for him is out there somewhere.

Then we met a black-and-white corgi mix named Dingo. He started to jump, but instantly sat when Bev corrected him. Bev heaped endless praise on this senior, whom she described as “a dream to walk.” She said that he also he waits to go to the door until invited, sits and downs on command, and doesn’t pull. Naturally, he promptly sat when Bev asked him to pose for photos. Bev pointed to other positive traits too, such as knowing how to entertain himself, by playing with a stick when alone. In addition, Bev observed that, “Dingo was obviously in a home at one time as he keeps a very tidy space and no accidents. He’ll make a wonderful companion for maybe a single retired woman who just wants a loving companion.”

Last came Marley and Hershey, about whom Bev lamented, “Who will want two dogs that are out of control?” She explained that both dogs had lived in an apartment and then a hotel before they were relinquished to a shelter. Bev believes that since their arrival at Good Dog Rescue they’ve released some of their pent-up energy, but also feels that the two would do good with walks or even a sport like agility. Bev also said that the shelter was bad for them, because “they missed being with people.” But they’re showing themselves to be loving and sweet dogs,

who like to run, jump, and play as dogs should.

With an annual average of ten to twenty dogs in her care, not counting the rescue-fails, Bev can’t easily keep up with their plethora of needs. For that reason, she’s grateful to the Nebraska No-Kill Advocacy Group from the University of Nebraska-Lincoln. The club’s student members partner with no-kill animal shelters and assists them by volunteering, advertising and fundraising. For Good Dog Rescue, students visit to bathe dogs, take them for walks, and supervise group playtime. The students also help Bev promote Good Dog Rescue through social media.

It’s due to the Good Dog Rescue website that Luna’s story has a happy ending. A young lady saw Luna’s picture on the web site and decided to meet. Bev said that, “Luna was her usual rambunctious self at first but settled down nicely.” Melissa thought that Luna was “a beautiful and sweet dog” and soon returned to adopt Luna. Thrilled, Bev posted the good news on The Good Dog Rescue Facebook page: “Happy, happy, happy day! Luna, we are SO happy for you, and thanks to Melissa for seeing the greatness in Luna and giving her a great home!”

Just as this article was ready for publication, Allie also found her forever home. Bev posted to Facebook: “Yay for Allie! Thanks, Linda, for picking Allie to be a companion for you and your two older dogs on your lovely acreage. Linda says that Allie is now her shadow, sleeps on the bed, and loves the freedom.”

Other dogs at Good Dog Rescue still await their forever home, including new arrivals since my May visit. Contact Good Dog Rescue, if you’re interested in visiting, fostering, or adopting one of its dogs. Check back here in the months ahead to learn more about how Good Dog Rescue and similar groups match homeless animals with adopters.