You never know who your passion for animals will inspire. It could even be your spouse.

Matt Yank has always loved animals but says his biggest inspiration to volunteer in animal welfare” came from his wife. Megan helped Matt realize that animals, “don’t have a voice and we owe them the respect and love that they show us unconditionally.” 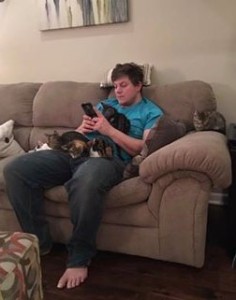 Since 2010, Matt has spent his Fridays cleaning cat rooms and caring for cats at The Cat House. He has also helped with special tasks such as “hauling the pallets worth of cat litter that needs to be replenished once a month” and “locating and wrangling kitties that don’t want to be placed in kennels or have found themselves in precarious situations or locations.”

Andy Frederick has always loved animals but credits me tongue-in cheek his involvement with animal welfare: “I’m not technically a volunteer. I was conscripted by my wife.”

Since 2005, Andy and I have helped a variety of animal welfare groups. For several years, we sponsored high-needs dogs at Hearts United for Animals and visited them to help with their socialization. In 2012, we fostered (and later adopted) a happy-go-lucky senior silky terrier named Gizmo through Nebraska No Kill Canine Rescue. For the three years that I volunteered with Husker Cats, Andy helped me during bad weather to feed community cats and clear snow from their outdoor homes. Since I began blogging for Lincoln Animal Ambassadors in 2015, he’s served as my editor and occasional photographer. This spring, we started fostering kittens for The Cat House.

Those years of helping animals have given both men moments in which they can take pride. For example, Andy cited the challenge of the challenge of finding a workable sleeping arrangement for Gizmo. “We’re pets-in-our-bed people,” Andy explained. “If a pet wants to sleep in our bed, that’s where the pet sleeps. And at the time we had Gizmo, we also had our toy poodle and a cat, both of whom slept in our bed. But Gizmo didn’t see well and didn’t understand that he shouldn’t go stumbling around in our bed, because eventually he would get too close to our cat and the fur would fly.” The solution? Andy initially tried dividing our bed with a sheet. He strung a rope above the bed and down the middle, and then draped a sheet over it, so that Gizmo was on one side and our cat was on the other side. “It worked,” Andy said, “but we didn’t like sleeping in a divided bed. Then I built a bed for Gizmo on my side of the bed. It was low enough that he couldn’t climb out of it and into our bed, but it was high enough that I could easily reach him to pet him.”

Another memorable experience for Andy was serving as my photographer when we visited the Nebraska State Penitentiary to do a series of articles about the Second Chance Pups program. Andy said, “I’ll never forget walking through the prison yard to and from the kennels; it’s a completely different world. I’ll also never forget how strongly the inmates care for their dogs, and what skilled and patient trainers they are. Of all the photos I’ve taken in my life, I’m proudest of the photos I took of the Second Chance Pups program.” One of those photos even took on a life of its own. Someone took one of the photos that Andy had shared on Facebook and uploaded it to Imgur, where it was viewed by 1.5 million people and resulted in unexpected donations to the Second Chance Pups program that day.

Some of the moments the two men have experienced as volunteers give them cause to look back on and laugh. For example, Matt was once asked to help catch a cat that had escaped while a foster pet parent for The Cat House was doing an interview at a local TV news station. “The kitty had been loose for several hours,” Matt said, “and staff at the news station had no clue where she was. All they knew was she was in the studio somewhere.” A volunteer at The Cat House called Matt to ask him to help find and secure her. “I walked around the studio for ten minutes,” shared Matt, “and found her immediately. The look of shock on the staff’s faces was priceless.” 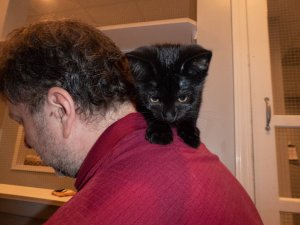 In another incident involving a cat, Andy shared his story of the door dasher from the first litter of kittens we fostered for The Cat House. While the kittens were with us, Andy prided himself on being quick enough to nab the door dasher whenever he tried to dart out of our spare room. Every time Andy would tease him: “I’m faster than you!” Flash forward: The kittens graduated to a room at The Cat House and Andy and I went to visit them. A family was with the boy kittens, so we occupied ourselves by visiting other cats. Later while Andy was taking a break on a bench in the hall, he heard the family prepare to leave. “The door opened,” Andy said, “and–whoosh–there went the door dasher! The hallway goes in a rectangle around a block of inner rooms. The door dasher went counter-clockwise, away from me, so I went clockwise. I got to the next corner over a split second before he did, and the instant I saw the black blur I put my hands down and he ran right into them. Then I lifted him to my face and said, ‘You’ll never be faster than me!’”

Then there are the life-changing moments. Matt and his wife Megan have fostered many kitties. Every time he hears that they’ve found a permanent home Matt is very proud of them, but fostering can also bring grief. “On a couple of occasions, we have had fosters that had terminal illnesses that gave them very little time to live,” Matt shared. “In these instances, we took in the cats as if they were ours and gave them the love they deserved. And when the time came for them to cross the rainbow bridge I stayed with them so that they weren’t alone.”

Both men have both grown in their volunteer abilities. Matt pointed to a dramatic increase in how much he can contribute to The Cat House, while Andy noted that his editing abilities (and maybe his photography skills) have improved.

The two men have also learned more about animals from caring for them. Matt praised his wife’s gift for knowing when animals are sick, and said that thanks to her he’s better able to “identify when an animal is in distress and in need of medical attention.” Andy expressed amazement at how “even young kittens can have distinct personalities” and said that “it’s fun watching their individualities emerge.”

Matt and Andy both offered encouragement to animal lovers who are not yet involved in animal welfare. Matt shared a quote that’s a favorite of his and his wife: “You haven’t lived until you have done something for someone who can never repay you.” His advice to new animal welfare volunteers is to not view their contributions as work. “It should never be seen as a job but more as a fun and fulfilling activity.” Andy has some tongue-in-cheek advice for people who are married to animal welfare volunteers: “Support your spouse in his or her volunteer work if you’re too unmotivated to find volunteer work of your own. Your life will be richer for it.”

What do the wives of these men think about their husbands’ support?

Megan wrote, “I couldn’t ask for a better person who supports and contributes to my passion for animals and cats especially. A lot of people ask me if my husband likes cats too and I wish to emphasize how much Matt truly loves animals and most importantly cats. Some days I think he likes cats more than me, but I doubt it!”

As for me, I feel blessed every day that Andy encourages me to rescue cats, foster cats, buy stuff for cats, and train cats to do tricks, agility, and therapy. I might inspire him, but he also motivates and challenges me, and as such our lives are all the more enriched.